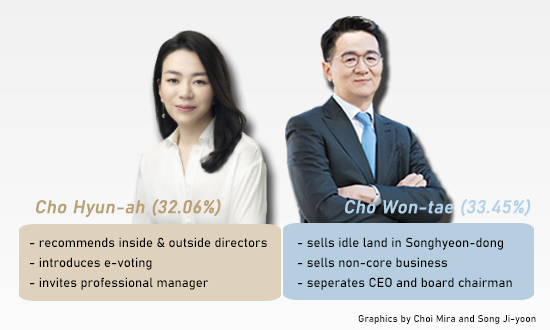 이미지 확대
Cho Hyun-ah, the eldest daughter of late Hanjin Group Chairman Cho Yang-ho, will this week make management overhaul proposals to win favor from shareholders in a proxy battle next month against her brother Cho Won-tae who took over the group’s chief post after their father’s death.

According to industry sources on Wednesday, Hyun-ah and her backers including local activist fund Korea Corporate Governance Improvement (KCGI) and midsized builder Bando Engineering & Construction Co. in proxy battle are conducting final review on shareholder proposals including candidates of both inside and outside directors and ways to overhaul management such as inviting a professional manager and introducing electronic voting system. They are expected to release the measures within this week at the earliest, the sources found.

As the moment of truth at the shareholder meeting on March 27 nears, the market is closely watching which side the National Pension Service (NPS) and minor shareholders will take.

NPS is estimated to hold 2.9 percent stake in Hanjin KAL, the holding entity of the group, which is lower than previous estimation of 3.45 percent released by Kim Myeong-yeon, a lawmaker from the Liberty Korea Party in June last year.

Although some suggest that NPS could not hold much sway in the vote due to the small ownership, majority of sources from the investment and financial industry said that it still has a great influence because many global asset managers tend to follow the decision of NPS, the world’s third biggest pension fund.

Votes by minor shareholders will also be important in the battle. Last year, Hanjin KAL’s second largest shareholder KCGI with a 12.01 percent stake mustered 30 percent of votes in its opposition to the reappointment of CEO Seok Tae-soo, the Cho family’s close aide.

Every vote counts as the heiress has built up 32.06 percent on her favor versus her brother’s 33.45 percent that includes backing of other family members, Delta Air and Kakao.

Cho meanwhile proposes to sell non-core assets in hospitality and leisure doted by his elder sister.