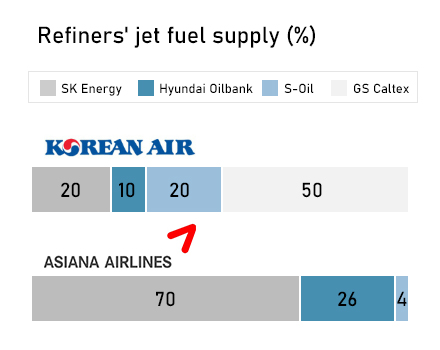 이미지 확대
The purchase of full-service carrier Asiana Airlines Inc. by HDC Hyundai Development Co. could shake up the refining industry as fuel sourcing could be switched to a Hyundai family member.

Asiana Airlines source 70 percent of fuel from SK Energy, 26 percent from Hyundai Oilbank and 4 percent from S-Oil, according to industry sources on Monday. The airline chose SK Energy as the biggest fuel supplier in 2015 in return for SK’s purchase of partial stake in Kumho Industrial that helped business normalization of Kumho Asiana Group.

But switch of parent could change the story. HDC has bought controlling stake in Asiana from Kumho.

The nation’s flag carrier Korean Air Lines gets around 50 percent of fuel supply from GS Caltex based on close ties of Hanjin and GS Group. It receives 20 percent from each of S-Oil and SK Energy and 10 percent from Hyundai Oilbank.

Jet fuel was the third biggest profit source for local refiners in 2018. Market experts estimated air fuel sales take up 10 percent to 15 percent of entire revenue of the country’s four major refiners. Fuel oil margins are currently higher than margins for gasoline that slipped to below $10 per barrel last year, taking up a big part in refinery’s earnings last year, according to an official from the refinery industry.

Industry watchers speculate the new owner of the nation’s No.2 full-service carrier may try to source more fuel from Hyundai OilBank, a company that shares Hyundai name. If it happens, it could bring a huge change in the landscape of the nation’s jet fuel market.