이미지 확대
South Korea’s No. 2 full-service carrier Asiana Airlines Inc. managed to hold up a profit streak in the third quarter by transporting cargoes during hiatus in passenger travel due to drawn-out pandemic.

The bottom line on a consolidated basis also delivered 9.4 billion won in black from a loss of 232.5 billion won from the previous year, while sales lost 54.7 percent on year to total 829.7 billion won.

Asiana Airlines shares finished Tuesday up 4.13 percent at 5,800 won after ending Monday at its daily ceiling.

The better-than-expected third-quarter results were driven by its all-out efforts to reduce costs and offset losses with expansion of freight business, the airliner said. With the efforts, Asiana Airlines extended profits for two consecutive quarters following suit of its bigger rival Korean Air Lines Co. despite the overall slowdown in global air travel.

Revenue from passenger flight business shriveled 80 percent on year due to the closure of borders among countries to prevent the spread of Covid-19 infections but that from air cargo service jumped 54 percent to 484.5 billion won on rising global demand for IT devices, Covid-19 testing kits and medical supplies amid a shortage of carriers.

“To meet the growing demand for cargo deliveries, Asiana Airlines deployed more flights to regions with higher demand, such as the United States and Southeast Asia,” said a company official. 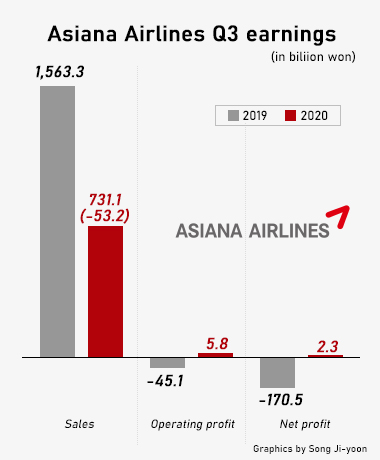 이미지 확대
Revenue from cargo service to the U.S. soared 64 percent and to Southeast Asia 79 percent.

Asiana Airlines has renovated two idled A350-900 jets to deliver more freight. The renovation helped it add another 23 tons of freight on a plane. Three B777-200ER carriers also have been restructured to carry more freight.

The airliner now is planning to keep up growth momentum also in the final quarter, with more cargo services to meet the strong global demand. In response to a possible demand for Covid-19 vaccine deliveries, it has established a delivery standard for vaccines and secured a charging facility for special containers at the airport terminal.

The improvement in earnings for two consecutive quarters will likely aid its merger with bigger Korean Air Lines under state-led restructuring.

State lender Korea Development Bank on Monday announced that the full-service airline under state lifeline would go under the arm of Korean Air Lines through a bailout scheme. The bank will invest in Hanjin KAL, parent of Korean Air, which in return will fuel 2.5 trillion won through purchase of new shares to enable Korean Air to become the largest shareholder through an investment of 1.8 trillion won.