The online mall run by Korean mobile carrier SK Telecom said Monday the U.S. e-commerce giant agreed to take a 30 percent equity stake in 11Street. The investment would enable Amazon to distribute its products and services on the platform and give it an option to purchase additional shares in 11Street before its initial public offering.

The addition of the multinational name could be a game-changer in Korea`s e-commerce market dominated by local names like Coupang and Naver and speed up the race to build up economies of scale.

Last month, CJ ENM Co., the entertainment arm of CJ Group, and Studio Dragon Co., the drama production house under the conglomerate, agreed to each swap 150 billion won ($135.5 million) worth of shares with internet giant Naver. CJ Logistics Corp. would separately exchange shares worth 300 billion won with the portal giant. 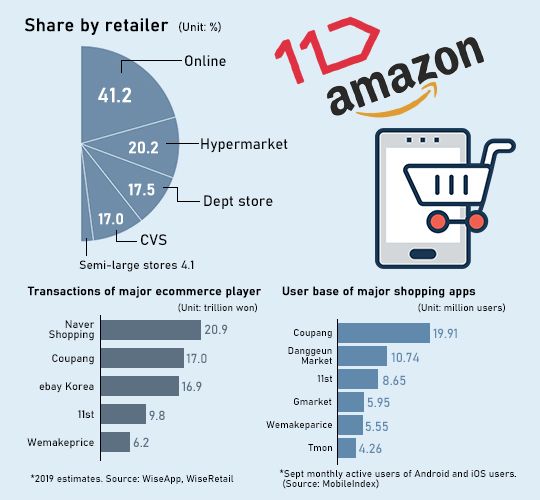 Korean e-commerce platform giant Coupang has been venturing into new businesses to bolster its profitability. It recently acquired Hooq Digital, the Singapore-based video streaming operator that is one of the top three streaming players in Southeast Asia. It is readying to launch an over-the-top media service, like Amazon Prime, in Korea next year and is reportedly in talks to win exclusive broadcasting rights to popular sports games including the U.S. NBA.

Online shopping has now surpassed brick-and-mortar stores in Korea. Online channels accounted for 41.2 percent of all retail sales in 2019, ahead of hypermarkets (20.2 percent), department stores (17.5 percent) and convenience stores (17.0 percent). Korea’s e-commerce market is projected to top 150 trillion won for the first time this year, and occupy more than half of the total retail market.