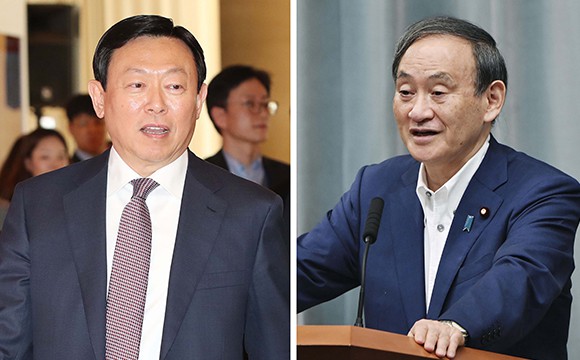 Japan’s daily newspaper Nikkei reported on Monday that Shin and Suga on Sunday had a lunch meeting in Tokyo. Details of their talks have not been disclosed, but sources speculate they may have discussed ways to improve tourism and retail exchanges, given that Suga has been focusing on reviving tourism since his inauguration last month. Shin was accompanied by heads of retail arms of the Korean conglomerate with businesses both in Korea and Japan.

Business circles hope that Shin, who has close ties with not only Suga but also many Japanese politicians, could play a role in mending relations between South Korea and Japan that have remained fraught over historical and trade issues.

Business leaders have been independently trying to improve ties to jointly combat the challenges from Covid-19 pandemic and normalize bilateral trade and travel.

Shin was appointed as chairman of Japan’s Lotte Holdings on April 1 to command Lotte’s businesses both in South Korea and Japan. But he had to miss the shareholders meeting of Lotte Holdings in June due to Covid-19 travel ban.

S. Korea to nearly triple the size of green biotech industry by 2030