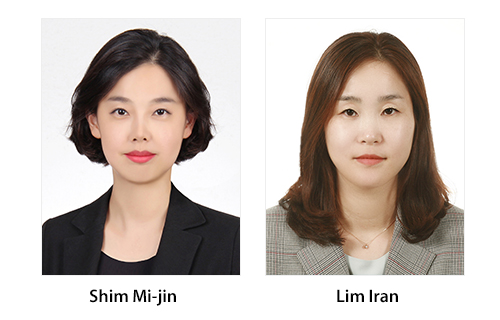 The company on Thursday announced its annual reshuffle of senior management. Three of the 10 new executives were women and two of them in their 30s, making them the youngest senior appointments in the company’s history.

They are Shim Mi-jin, 34, head of the personal care business unit, and Lim Iran, 38, marketing department chief for the cosmetics brand Ohui. Both joined LG Group in 2007.

LG Household & Healthcare said Shim played a pivotal role in boosting the personal care business and taking the company to No. 1 in market share in the body wash category. Shim also oversaw the launch of “Himalaya Pink Salt Toothpaste,” cementing LG’s dominance in the oral care segment. Since 2018, she has been heading the company’s hair and body care department.

Lim was credited for her successful marketing of Ohui, a cosmetics brand LG has been aggressively pushing as a follow-up to its primary luxury label, The History of Whoo. By hiring actress Kim Tae-ri as the new face for Ohui, Lim helped rejuvenate the brand and broaden its appeal to younger customers, turning Prime Advancer Ampoule Serum into an instant hit.

The third female executive is Bae Mi-ae, 43, who has been heading the herbal cosmetics marketing department for Whoo since last year. She was acknowledged for her efforts in establishing Whoo as a premium Korean cosmetics label and elevating its status abroad. Under her watch, Whoo became the first cosmetics brand in the country to hit 2 trillion won ($1.69 billion) in annual sales.