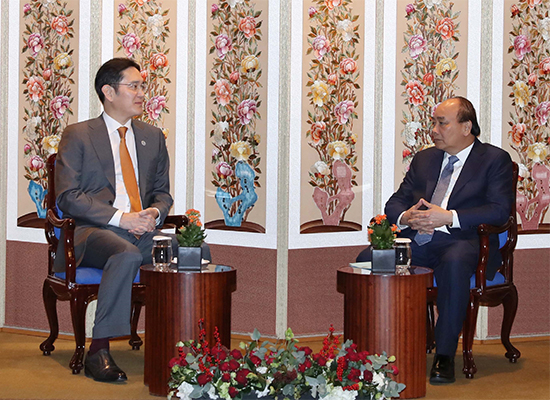 “Samsung’s success is also Vietnam’s success,” said Nguyen as he requested Samsung to make Vietnam its “biggest strategic production base in the world in all business areas.”

He invited Samsung to establish a chip factory in Vietnam, promising to provide incentives when such investments are made.

Lee did not immediately respond to the proposal but shared details of Samsung Electronics’ $210 million plan to set up a research and development center in Vietnam. The Korean tech giant will hire about 3,000 locals to the lab opening in 2022 in Tay Ho Tay district in Hanoi focusing on smartphone and other ICT technologies.

The company hopes the upcoming R&D center in Vietnam would further cement the Southeast Asian country’s position as its core overseas manufacturing and research base.

Samsung Electronics and its affiliates currently have nearly 130,000 employees in Vietnam, producing from smartphones to home appliance. Samsung has invested $1.7 million in Vietnam and is responsible for a quarter of the Southeast Asian country’s total exports. Nearly half of its smartphones are assembled in Vietnam.