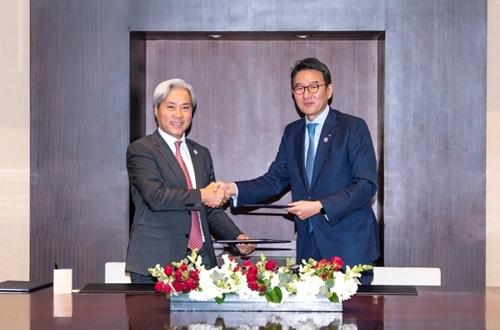 GS Energy on Thursday signed a memorandum of understanding with VinaCapital Investment, Vietnam’s largest asset management company, in Seoul, to develop an LNG combined cycle power project in the Southeast Asian country. The signing ceremony was attended by GS Energy CEO Huh Yong-soo and VinaCapital CEO Don Lam among others.

Under the strategic partnership, the two companies will jointly build and operate a 3GW LNG-fired combined cycle power plant in southern Vietnam, which would generate power large enough to cover 6 percent of the country’s total power capacity of 50GW.

GS Energy plans to sell electricity to be generated from the plant to state-run Vietnam Electricity Group after signing a power purchase agreement (PPA), which would guarantee stable profit over a long term.

To operate and manage the power plant, GS Energy plans to establish an LNG value chain in Vietnam by introducing LNG and managing storage and vaporization facilities.

An unnamed official from GS Energy expected that Korea`s largest private power producer GS Group would meet the needs of the Vietnamese government that has been actively seeking to ramp up power generation in the country grappling with a chronic power shortage, thanks to the partnership.

Vietnam needs to boost power production to meet the soaring electricity demand in the country in line with the rapid growth in the economy. The Vietnamese government that projects the country would continue to suffer from a power shortage until 2025 has been actively inviting global energy firms to join the country’s power development projects.

GS Energy, which is involved in not only LNG power plant construction but also LNG trading and LNG buyout and management, boasts of extensive know-hows in power business. It has a concrete LNG value chain encompassing fuel supply to power production and sales.

GS Energy CEO Huh said the company will successfully complete its project in Vietnam to prove its global-level capacity in carrying out energy projects. He added that the company will take the latest opportunity to expand its business realm beyond its current mainstay businesses such as in the areas of oil refining, petrochemical, resource development, LNG, power and collective energy.