이미지 확대
Samsung Electronics has kept up a comfortable lead against rivals in capital investment for future growth, having spent 53 percent more than its rival Intel over the last three years.

According to a report released by market research firm IC Insights on Thursday, the world’s biggest memory chip maker’s capital expenditure for the overall semiconductor sector from 2017 to this year was estimated at $65.8 billion, well ahead of U.S. rival Intel at second with $43 billion and doubling combined spending by Chinese chip producers.

Samsung Electronics was estimated to earned revenue of 226 trillion won ($194.7 billion) from chip business for the three years, waging a horserace with Intel with 227 billion won in chip sales.

"It appears that the company is very serious about staying well ahead of the new China memory startups and competing with TSMC at the leading edge of non-memory technology," the market researcher said.

Samsung Electronics said in a conference call after reporting its third-quarter earnings last week that the investment for the final quarter would focus on building memory infrastructure to address mid- to long-term demand, and it also plans to expand extreme ultraviolet (EUV) 7-nano capacity to strengthen the foundry business.

The company’s aggressive investment in semiconductor facilities and equipment is part of its pledge to fend off the ascending rivals in memory sector as well as to become the world’s No. 1 logic chip player. To achieve the goal, the global memory chip giant in April announced to invest 133 trillion won by 2030 to strengthen its non-memory logic chip business. 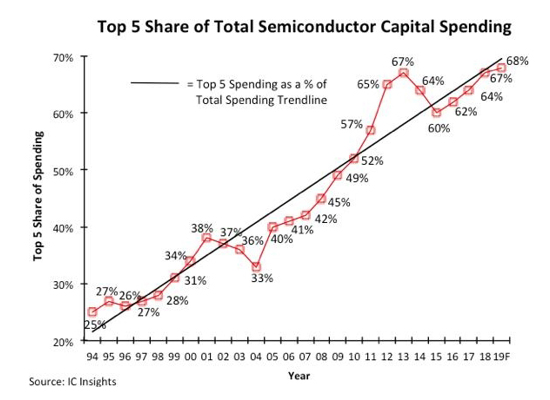 Capital spending of the world’s five leading chip producers – Samsung Electronics, Intel, TSMC, SK Hynix and Micron – would take up 68 percent of total global investment in the sector this year, the report also suggested. The share of the top five spenders stayed around just 25 percent in 1994, but it has been on a rapid increase since it surpassed 50 percent in 2010 to reach its peak at 67 percent in 2013 and 2018.

“The chip majors are expected to continue to ramp up their spending to not just survive in the industry but also widen the technology gap with their rivals,” according to an industry source. “This is the right time for the companies to boost their investments because the chip prices are bottoming out.”