이미지 확대
The marriage of Korea’s biggest budget carrier Jeju Air with full-service carrier Asiana Airlines will create a new Korean flag carrier with enhanced competitiveness on the global stage, said a senior executive of Aekyung Group in describing the purpose of competing in Thursday’s near-$2 billion aviation M&A tender.

“The synergy from the integration of Jeju, Asiana and its budget sisters Air Busan and Air Seoul could be enormous,” said Lee Sung-hoon, chief financial officer of Aekyung Group, in an exclusive interview with Maeil Business Newspaper.

Under one family, the airliners will be able to rationalize redundant routes and management while offering a huge choice of flight schedules, he said.

The deal offers an estimated 31.0 percent stake through handover of existing shares worth 400 billion won ($345.6 million) and issue of new shares of around 800 billion won. When counting in the six subsidiaries under the airliner including Air Busan, Air Seoul and Asiana IDT, the value could stretch from 1.5 trillion won to 2 trillion won. If a deal is not signed by the year-end, creditors have threatened to find buyer on their own. 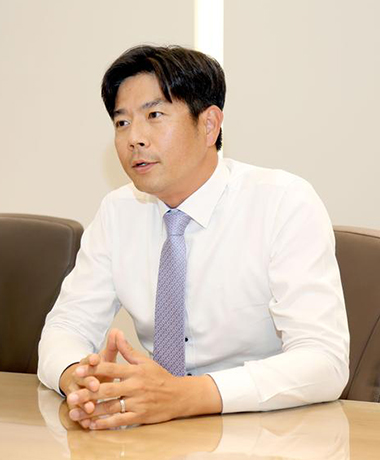 With Asiana Airlines under its arm, Aekyung could command a fleet of about 160 aircrafts responsible for 45 percent on the international routes and 48 percent on the domestic routes as of the first half of this year. The country’s largest full-service carrier Korean Air Lines currently has a fleet of 169 as of October this year and fly to 126 cities, including local cities, in 44 countries.

Emphasizing the strength of each airline, Lee envisions that Jeju Air will continue to serve as a low-cost carrier. For Asiana Airlines, Lee promised fast normalization with minimal changes on its payroll. He again emphasized the importance of merging companies in the same business, citing past deals between global airlines.

“Delta Air Lines, for example, has become one of the largest airlines in the world after its union with Northwest Airlines in 2008,” he noted, adding the mergers between Hyundai Motor and Kia Motors, as well as CJ GLS and Korea Express were the successful local cases.

When asked about market concerns for its funding ability, Lee stressed that having knowhow and understanding the aviation industry are more important than financial status in turning around the ailing rival.

He denied rumors that Jeju Air joined the bid to obtain confidential business secrets in Asiana Airlines during due diligence.

“It is hard to expand the business with a single type of short-haul aircrafts in the fierce market,” he said.