Many open challenges lie ahead for fully autonomous driving: Manocha 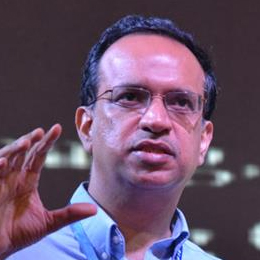 Much hyped fully autonomous cars will hit the road much later than expected due to still many open challenges, but ongoing research on the future mobility technology will significantly enhance driving safety and conditions in the near future, said Dinesh Manocha, professor of computer science at the University of Maryland.

“There are a lot of challenges ahead of self-driving cars,” Manocha said in a recent interview with Maeil Business Newspaper during the Open Data Science Conference (ODSC), the world’s largest applied data science conference series, in San Francisco, the United States. “It’s still a long way to go to replace a taxi driver and obtain full autonomy.”

Manocha, who graduated from Indian Institute of Technology in Delhi, India, and received doctoral degree from UC Berkeley in California, is a renowned scholar and expert on autonomous driving, and his research on the related technology has been supported by leading industry players such as Intel, Facebook, Google, and Adobe.

Manocha noted prevalent “hype or irrational exuberance” around autonomous driving citing that nobody has yet succeeded in rolling out a fully self-driving car despite considerable progress on autonomous driving over the last decade.

Audi with a goal to turn the Audi A8 into a fully self-driving car by 2017 has not achieved it yet, and Andrew Ng, then-artificial intelligence scholar at Baidu, in 2016 envisioned the launch of a truly unmanned vehicle by 2019.

“There is a reason for this slow development of autonomous vehicles,” Manocha said. “To make a self-driving car that will replace the driver [level 5], the autonomous driving technology requires very robust solutions to three major problems – recognition, planning, and control,” plus integrate these technologies.

The priority is to develop much advanced recognition technology to improve the accuracy of perception systems, which interpret and classify sensor data about various objects on the road in real time, Manocha said. An autonomous car must be equipped with a perception software that can clearly discern a real bicycle running on the road and a bicycle sticker on the back of the car, as well as recognize the reflected image of a bicycle on the shiny surface of a vehicle, he explained.

“In this case, it is ambiguous what conditions have to be put in order for the computer to recognize real bicycles,” the professor said.

Planning road driving is another challenging area, Manocha said. “Maneuver planning has a lot of theories out there, but it’s still in the research phase, and it’s hard to say there’s a standardized theory that will work well in all situations.”

In particular, the problem becomes more serious in dense and urban scenes. Such self-driving technologies successfully tested in researchers’ preferred regions like Phoenix in the United States with flat roads and pleasant weather conditions “cannot be applied in India or China” with cows passing roads and no distinction between pedestrians or vehicles on the road.

“It’s easy to say that you’ve succeeded in fully autonomous driving with the environment under control or constrained [like a lab],” he said. But “it’s difficult because there’s a lot of uncertainty in the real world.”

But it is too early to be disappointed, the professor said, assuring that the ongoing research on fully autonomous driving technology amid fierce race to obtain it among technology and auto companies will benefit drivers in other aspects.

Manocha expected that over the next 20 years, autonomous vehicle technology will be mainly used in increasing the safety of all drivers and improving driving conditions. For example, it will help ease driving stress of taxi drivers who have to hold the steering wheel for a long time and improve driving conditions by enabling drivers to avoid traffic jams. Also, various sensors in the car can considerably improve driving safety, he added.

The race to obtain self-driving technology is fierce among global technology and auto companies including Google, Uber, Tesla, Toyota, and Hyundai Motor on expectations that the future mobility technology will usher in a new revolution in human life.

By Shin Hyun-kyu and Lee Eun-joo