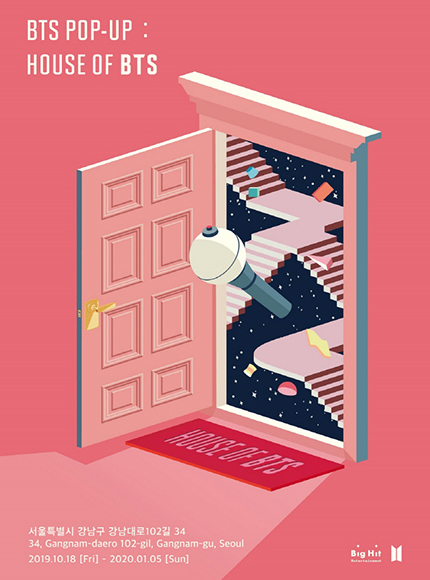 The upcoming ‘House of BTS’ is an upgraded version of the boyband’s `BTS World Tour Pop-up Store,` which opened in Los Angeles, Chicago, New York, London, and Paris earlier this year, the company explained. The Gangnam store will open for 80 days from Oct. 18 to Jan. 5 of next year.

The Gangnam pop-up store will be located in a three-story building in Gangnam, southern district of Seoul. It will showcase interactive spaces such as a showroom and a music video experience zone as well as stores and restaurants under the theme of “Boy With Luv,” the main track of “Map of the Soul: Persona” album released in April.

이미지 확대
The company hopes the new shop would attract visitors from not only home but also abroad.

Separately, BTS will be holding a solo concert at King Fahd International Stadium in Riyadh, capital of Saudi Arabia, on Oct. 11 to mark the final overseas stop of its "Love Yourself: Speak Yourself" world tour. BTS is the first foreign singer to perform at the King Fahd International Stadium. The concert will be live-streamed across the world through Korean internet giant Naver’s V Live Plus.