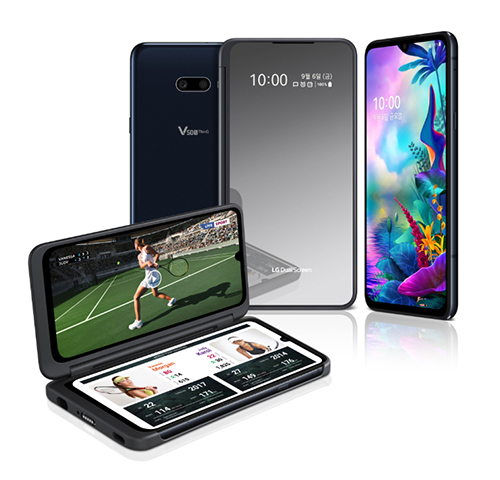 South Korea’s LG Electronics Inc. will release an upgraded version of its dual-screen flagship smartphone V50 ThinQ on Friday in the domestic market, the company said on Thursday.

The new dual-screen phone dubbed V50S ThinQ that carries a price tag of 1,199,900 won ($1,003) in the local market sports most of the well-received features of its predecessor V50 ThinQ that drew strong sales of almost 600,000 units since its launch in May.

The premium phone with a 6.4-inch detachable display will come in one color called Aurora Black and with a transparent silicone case. It will also hit the shelves in the global market including North America and Europe after the domestic launch.

The latest phone features a smaller outer display in front to enable users to check notifications without opening the phone. It is installed with ‘free stop hinge’ that makes it possible to control the angle of the second screen like a laptop screen.

LG Electronics has significantly enhanced camera functions for the new flagship. It has a 32-megapixel camera in front and triple camera on the back. It has added the ‘4K time lapse’ function that captures every detail of quick moving objects, and ‘AI action shot’ that can raise the shutter speed up to 1/480 seconds. There is also a new ‘ASMR’ mode that maximizes sensitivity of microphones to deliver sounds more vividly.

The company received about 20 percent more applicants per day when recruiting early adopters to test the product prior to its official launch from Sept. 27 to Oct. 4. The V50S ThinQ will also become LG’s first dual-screen phone that hits the strategic North American market.

“We are sure that the V50S ThinQ would maintain the popularity of its predecessor because the advancement of the new device has been made upon customers’ demands,” said an official from LG Electronics. “We are working hard to allow as many customers as possible to experience our dual-display phone.”