Japanese glass maker AGC to exit from Korea in Jan amid trade, past issues 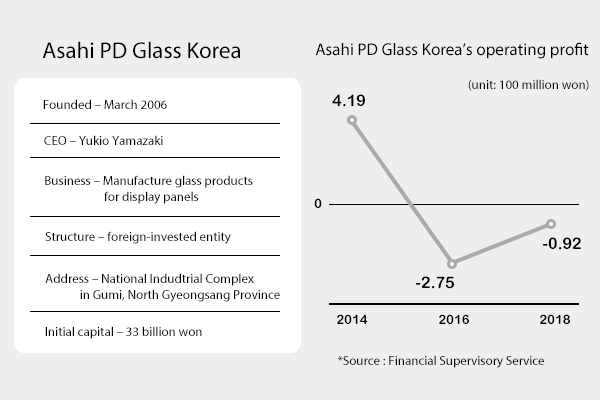 Asahi PD Glass Korea Co., the Korean unit of Japanese glass maker AGC, notified to its host administration North Gyeongsang provincial office that it will return building and factory site in Gumi to the local government in the original state by Jan. 25, 2020, when its leasing contact expires.

The company will inject 6 to 7 billion won ($5-5.9 million) into reinstatement of the site and factories after 14 years of business in Korea. The company has made the latest decision due to deteriorating management conditions ranging from the prolonged sales slump to labor disputes and the deepening trade rows between Korea and Japan, industry experts say.

Asahi PD Glass Korea, wholly owned entity of AGC, started its Korean business in Gumi, North Gyeongsang Province, in March 2006. It manufactured glass products for plasma display panels (PDPs) and had grown fast thanks to stable orders. In 2010 when the company posted an operating profit of 50.2 billion won on sales of 226.2 billion won, it paid half of its operating profit to the Japanese headquarters.

PDP production, however, has been halted since 2015 amid displays shifted to LCD and OLED panels. With no earnings generated since then, Asahi PD Glass Korea with 26 billion won in cashable assets has remained idle without any reinvestment.

Its departure also is timed with the court rulings demanding Japanese companies to compensate Korean individuals for forced labor during wartime and colonial period. The top court also endorsed seizure and liquidation of assets in Korea of the Japanese companies incompliant with the rulings.

AGC is also implicated in lawsuits for forced labor. In August, another Japanese firm Hitachi Zosen shut down its Korean unit. The Japanese industrial plant and machinery firm was ordered to pay compensation to Koreans forced to work for it without pay during Japan’s colonial rule.