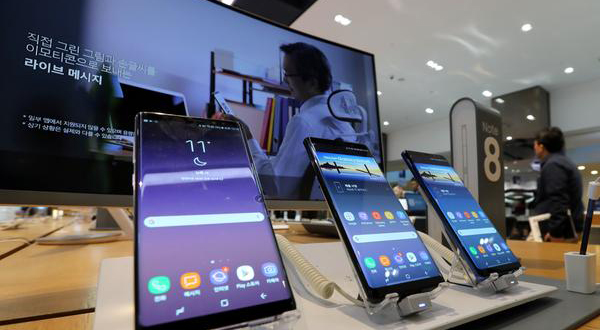 이미지 확대
South Korea’s Samsung Electronics Co. regained leadership in Central and South America in the second quarter with its best performance in the region while its Chinese rival Huawei Technologies Co. struggled with falling sales due to the U.S. export curbs.

According to Market Monitor quarterly report released by global market research agency Counterpoint Research on Tuesday, Samsung Electronics accounted for 42.8 percent of the smartphone market in Central and South America in the April-June period, its highest-ever performance so far in the region.

Counterpoint Research analyzed that Samsung Electronics and Motorola were the biggest benefiters of U.S. export restrictions on Huawei. Earlier this year, Washington has banned Huawei and prevented American companies from doing business with the mobile giant citing national security reasons.

Counterpoint Research said the current U.S. sanctions on the Chinese mobile giant has partly helped Samsung Electronics win over Huawei and regain lead in major markets in Central and South America, where it had steadily lost ground to ascending Huawei over years. The research company expected that Huawei’s market share in the region would stay below 10 percent under U.S. sanctions. 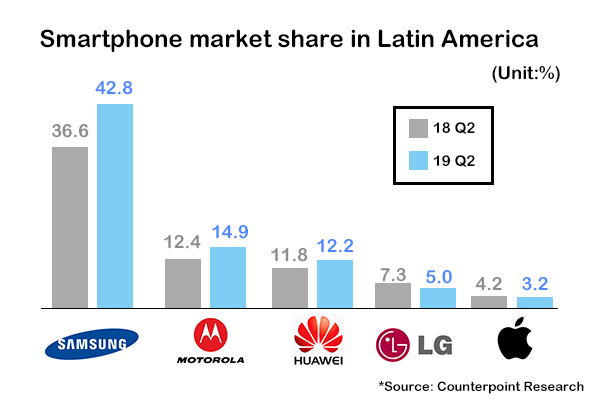 이미지 확대
Unlike Samsung Electronics, another Korean smartphone manufacturer LG Electronics Inc. struggled in Central and South America. LG Electronics held the third-biggest market share only in Brazil over the same period and dropped out of top five rankings in some countries such as Mexico and Colombia.

American handset maker Apple Inc. also saw its market share fall in most of the countries in the region, the report showed, struggling particularly in Brazil, Chile, and Mexico. Market analysts noted that the iPhone XR and iPhone XS are too pricey for the Latin American market while the iPhone 7 and iPhone 8 do not offer attractive features that could entice local consumers’ interest.

By price level, Counterpoint Research report showed that smartphones priced $99 and below accounted for the largest 35 percent of the total regional market in the second quarter, although an 11 percent fall from the same period a year ago. Sales of handsets priced $300 and higher also fell during the cited period.

On the other hand, sales of smartphones with $100 price tag surged 13 percent in the April-June period from a year ago. Sales of $200 smartphones showed biggest growth, namely Samsung Electronics’ Galaxy A7 and Huawei P Lite that offered discounts.

Samsung Electronics’ stellar performance came at a time when overall smartphone sales in the Latin American market fell 3.3 percent in the second quarter from a year ago, according to the report. Sales increased slightly against the previous quarter ended March but the on-year fall continued for four straight quarters.