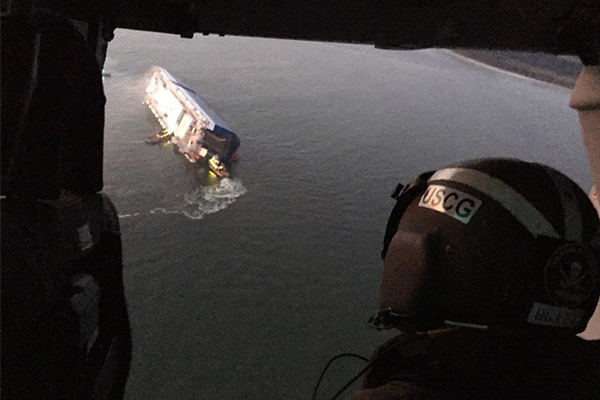 The Golden Ray operated by Hyundai Glovis listed off the southeast coast of U.S. State of Georgia on Sunday [Picture provided by the United States Coast Guard] ​

Shares of Hyundai Glovis and carmakers of Hyundai Motor Group fell Monday as investors awaited follow-up news after a cargo vessel carrying 4,000 finished cars to the Middle East for the logistics unit of the Korean automaking conglomerate capsized off the coast of the southern U.S. state of Georgia around 1:40 a.m. on Sunday.

A full-fledged rescue mission is still underway. Twenty people on board have been rescued and four Koreans believed to be inside the engine room remain missing, according to the foreign ministry on Monday. It is unclear what caused the accident.

Golden Ray, 199.9-meter ship capable of carrying 7,400 cars was built in 2017 and set sail under the flag of the Marshall Islands, according to the Hyundai Glovis and industry sources. 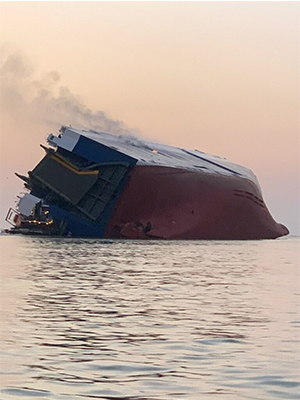 The Golden Ray operated by Hyundai Glovis listed off the southeast coast of U.S. State of Georgia on Sunday [Picture provided by the United States Coast Guard] ​

Among the 4,000 vehicles carried, 20 percent are believed to be Kia Motors manufactures from Georgia plant headed for the Middle East and rest in other finished cars assembled in the United States.

Hyundai Glovis declined to identify its customers that could be affected by the accident. Half of its vehicle transports are non-Hyundai names.

Hyundai Glovis’s shipping division in the second quarter earned 797.2 billion won in revenue, of which 63.5 percent or 505.9 billion won came from shipping finished car units. Revenue from shipments of completed vehicles in the period jumped 36.5 percent on year, with 55 percent generated from deals with non-subsidiary sales.

Hyundai Glovis for the business currently operates a total 55 carriers – 34 own vessels and 21 borrowed.​

By Moon Ji-woong and Lee Ha-yeon