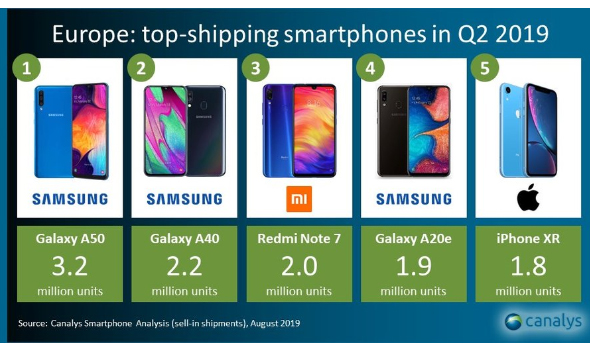 Samsung Electronics Co. commanded the largest share in the European smartphone market in the second quarter, benefiting from the stumble of Chinese rival Huawei subject to U.S.-led sanction.

According to a report released by market researcher Canalys on Tuesday, Samsung Electronics secured the largest 40.6 percent of the European smartphone market in April-June this year, up from 33.9 percent a year earlier. It shipped 18.3 million smartphones over the cited period, up 20 percent from the same period last year.

The Korean maker’s brisk performance was led by its budget Galaxy A series models, which accounted for over 12 million units. The Galaxy A10, A20e, A40, A50 performed exceptionally well with their combined shipments exceeding those of all other vendors combined in Europe.

The market researcher attributed Samsung Electronics’ latest achievement to product strategy as well as its efforts “to position itself as a stable alternative” for Huawei, suffering from U.S Entry List problems. “A lack of brand loyalty among users of low-end and mid-range Android smartphones, which has blighted Samsung for so long, has become the catalyst for its best performance in years,” stated the report. 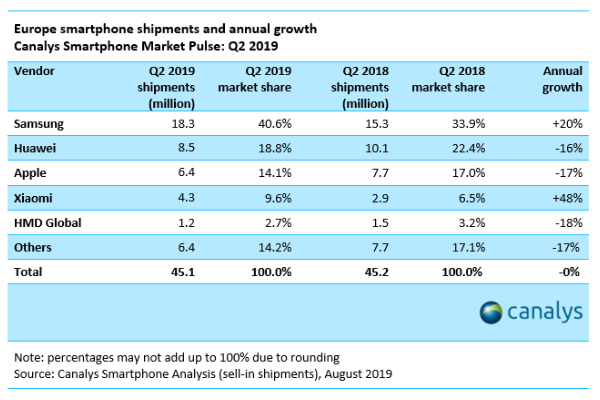 Huawei claimed the second largest 18.8 percent share in the European smartphone market in the second quarter with its shipments falling 16 percent on year to 8.5 million units.

Apple was the third-largest vendor, although its market share in the region shrank to 14.1 percent from 17 percent a year earlier. It delivered 6.4 million units, down 17 percent from a year ago.

Xiaomi was another gainer in Europe. The Chinese maker remained as No.4 in the second quarter this year but its market share grew to 9.6 percent from a year-ago period’s 6.5 percent. It shipped 4.3 million smartphones, up 48 percent on year.

Finnish maker HMD Global also made the top 5 in Europe. It was responsible for a 2.7 percent share by shipping 1.2 million units in the second quarter.