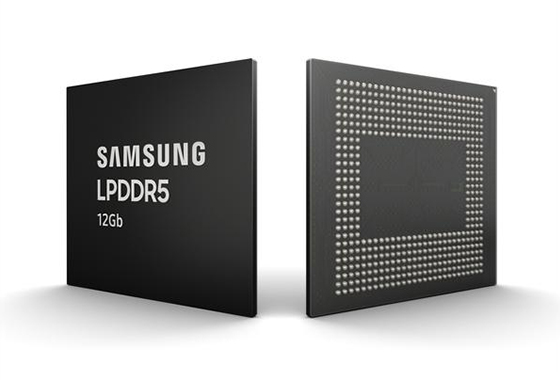 The company also is planning to start mass producing of 12-gigabyte (GB) LPDDR5 packages, each combining eight of the 12Gb chips, later this month to timely meet the growing demand for premium smartphone makers to cement its position in the global market.

The new 12Gb LPDDR5 chip boasts 1.3 times faster data processing speed of 5,500 megabits per second than that of the previous model LPDDR4X, which is applied to current premium smartphone models. A 12GB package based on the speed is able to transfer 44GB of data, equivalent to 12 full-HD movies (3.7GB size for each) in just one second, according to the tech giant.

The new chip also uses up to 30 percent less power than its predecessor on the high-speed mode thanks to the newly designed circuit for improvement in power consumptions, it added.

Samsung Electronics is considering moving the new chip mass-production to its major Pyeongtaek manufacturing base starting next year to better respond to the global demand. The chipmaker said it then will focus on development of the next model, 16Gb LPDDR5 memory, to keep its lead in the global mobile DRAM business.