이미지 확대
The South Korean box office drew 109.32 million moviegoers in the first half of this year, a record for the local cinema industry for that period, as this year’s calendar had blockbusters from the long-awaited last episode of Avengers series as well as Korea’s first Cannes winner “Parasite”.

According to Korea Film Council on Thursday, the tally for the first half was 13.5 percent, or 12.96 million higher than last year’s first-half attendance. Ticket sales also gained 16.0 percent to 930.7 billion won ($790 million) in the same period.

Homegrown movies reclaimed a majority of admissions with 52 percent for the first time in six years, which represents 56.88 million moviegoers, also a record number for the country. Compared with a year ago, the number increased by 11.91 million.

The strong performance was driven by two hit movies `Extreme Job` (16.26 million) and Cannes-winning `Parasite` (9.58 million), which drew nearly half of moviegoers in the period.

Foreign films attracted a total of 52.44 million moviegoers during the first half, up by 1.06 million from a year ago. 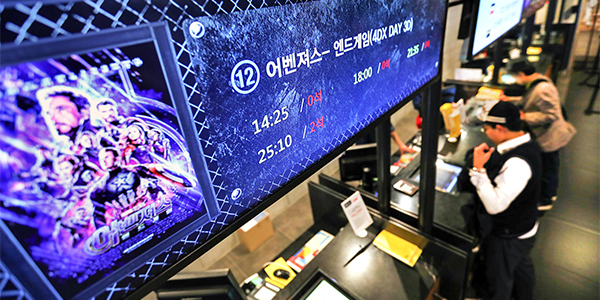 이미지 확대
Marvel superhero and Disney movies swept the screen. ‘Avengers: Endgame’ (13.92 million), the most-viewed foreign flick, became the fastest film to top the 10 million mark in the country. It was followed by Disney`s ‘Aladdin’ (8.27 million) and ‘Captain Marvel’ (5.8 million).

Eyes are on whether this year’s full box office attendance will break a record. The figure has hovered around 200 million for six years after hitting the mark for the first time in 2013 and peaking at 219.87 million in 2017. ‘Lion King’, ‘The King`s Letters’, ‘The Divine Fury’ and ‘Exit’ are among the much anticipated films for the second half.

By Kim Seul-gi and Minu Kim