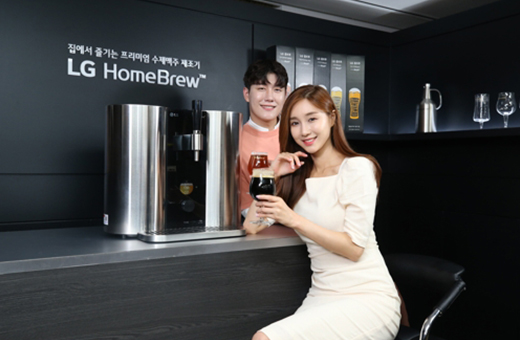 이미지 확대
LG Electronics Inc. released on Tuesday the world’s first capsule-based beer maker that allows users to make their own home craft beer with the push of a button.

Similar to the capsule coffee machine, LG HomeBrew runs on only water and capsule, with the beer-making process from fermentation, carbonation to aging entirely automated.

The single-use capsules come in five types: American IPA, American Pale Ale, English Stout, Belgian-style Witbier and Czech Pilsner. One capsule produces 5 liters of beer in two to three weeks. The Witbier, or wheat beer, takes about nine days, while the lager-type Pilsner takes the longest at 21 days. Others can be made within two weeks.

The capsule package comes with a big malt capsule and three tiny capsules for yeast, hop oil and flavoring. LG Electronics said the capsules were co-created with Muntons, the world-renowned British malt manufacturer. 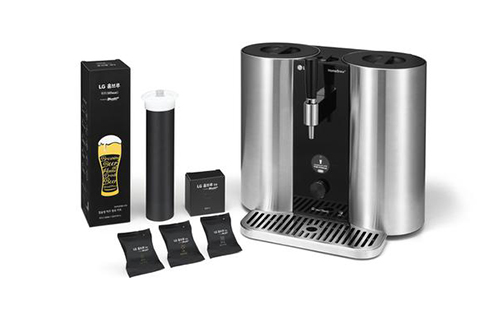 이미지 확대
The machine controls in real-time the temperature and pressure of the brewing status. The beer-making process can also be monitored via the machine display or smartphone app. Owners can select the temperature at which they want to chill their finished beer, in either 6℃, the optimum storage temperature, or a slightly cooler 4℃.

The self-cleaning system automatically washes and sanitizes the machine after each brew. An employee would also pay a home visit every six months for maintenance.

The HomeBrew is retailed at 3.99 million won ($3,387) but is also available for rent. The electricity bill for producing a single 5-liter batch is expected to be around 1,374 won.

The company said it is offering a 10-year guarantee on the inverter compressor, the machine’s core component. It also plans to expand its capsule offerings and start sales in overseas markets next year.

By Hwang Soon-min and Kim Hyo-jin