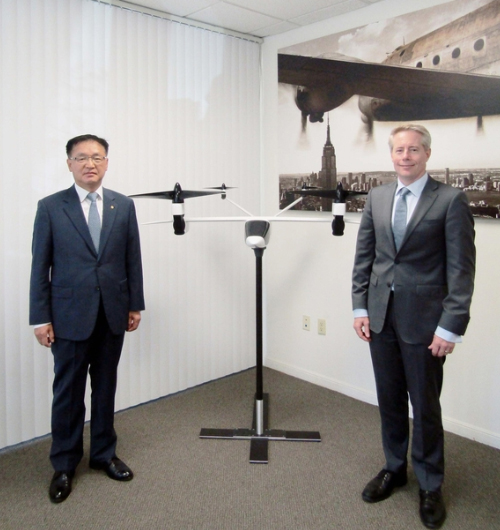 Hanwha Systems said on Thursday that it will invest $25 million in K4 Aeronautics to back the so-called air or jet taxi surfacing as a cost-efficient alternative for short-haul travel to choppers and light jets. The California-based company owns a number of patents that can be applied to the manufacturing of high-efficient and low-noise PAVs. The company, in particular, owns technology license that can lead to the development of electric-propelled PAV products.

The investment will allow Hanwha Systems to own partial stake in K4 Aeronautics and take part in the development of PAVs targeting the U.S. market. The Korean company plans to gradually expand investment in the future.

PAVs are gaining attention as a new means of transportation that can help overcome environmental issues such as air pollution and noise, as well as traffic congestion due to increasing number of cars and limited infrastructure expansion. Governments and industries across have been making active moves to develop PAVs as a new transportation mode amid introduction of cutting-edge technologies such as those of collision avoidance and autonomic flying and development in battery and motor technology.

Global aircraft manufacturers such as Boeing Co. and Airbus SE, as well as a number of startups have been putting out efforts to develop PAVs. Global ride-hailing firm Uber Technologies Inc. is also in the works to establish partnerships with various entities to create air taxi market. The company is projected to launch trial service in 2023 in the U.S. before launching commercial operations in 2025.

Hanwha Systems, which has been looking for ways to join the PAV market to seek future business opportunities, will take part in the development by utilizing its avionics, system integration, and cyber security technologies. The company plans to diversify its business into new areas such as aviation electronic parts.