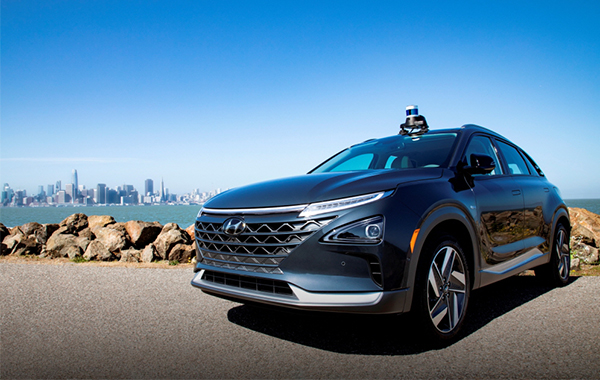 South Korea’s Hyundai Motor Co. and its affiliate Kia Motors Corp. have made a strategic investment in Aurora Innovation Inc., a U.S. self-driving technology startup, to accelerate their push in the development of autonomous vehicles.

Korea’s largest auto duo said Thursday they agreed to participate in the series B financing round of the Palo Alto-based company, which has now raised more than $600 million. The investment amount of the Korean companies has not been revealed.

Their partnership began in January 2018 when Chung Eui-sun, executive vice chairman of Hyundai Motor Group, and Chris Urmson, chief executive of Aurora Innovation, announced plans for future collaboration at the Consumer Electronics Show in Las Vegas. Since then, the companies have been working to create the driverless version of Hyundai’s Nexo hydrogen fuel cell crossover.

Aurora Innovation was founded in 2017 by a dream team of self-driving vehicle veterans. Urmson, its CEO, was the former chief of Google’s self-driving car project that has evolved into today’s Waymo. Sterling Anderson, Aurora’s chief product officer, previously led the development and launch of Tesla’s Model X and headed its Autopilot team. Drew Bagnell, its chief technical officer, was one of the founding members of Uber’s Advanced Technology Center.

Aurora Innovation is a leading player in the world of self-driving, with cutting-edge technologies in back-end solutions, control systems, and sensor and object recognition. Hyundai and Kia plan to work on perfecting the autonomous driving technologies of Aurora Driver, the company’s self-driving program mounted with its latest software module and high-performance cameras, radar and lidar.

The Korean automakers have set out to achieve Level 4 automation, just one level short of achieving full autonomy, in their robotaxi pilot project of eco-friendly cars by 2021.

By Lee Jae-cheol and Kim Hyo-jin