HHI merger with Daewoo Shipbuilding delayed due to militant unions

이미지 확대
A due diligence team from Hyundai Heavy Industries (HHI) and its creditor Korea Development Bank (KDB) yielded no results on Wednesday as their second attempted visit to Daewoo Shipbuilding & Marine Engineering (DSME) main shipyard site in Geoje, South Gyeongsang was once again obstructed by union workers in strong protest to the potential merger between the world`s two biggest shipbuilders.

Last August, the state-owned bank decided to hand over its entire 55.7 percent stake in DSME to HHI in exchange for entity ownership in a future combined entity.

Following its unsuccessful inspection into the DSME shipyard early last week, the due diligence team proposed a meeting with DSME union workers on Wednesday, but the union rejected the offer, claiming the merger plan should be canceled. Some 300 workers barricaded dockyard gates to prevent the due diligence team from entering. 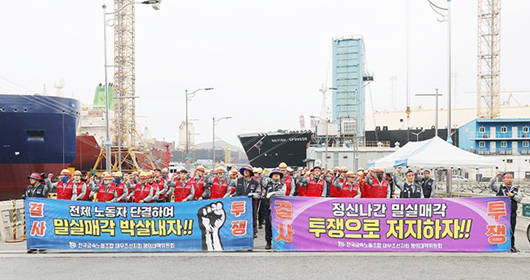 이미지 확대
Union members of occupied the office of Mayor Byun Kwang-young and turned violent to protest the government plan to sell the shipbuilder it bailed out numerous times to Hyundai Heavy Industries (HHI).

The official deadline for due diligence was set as Friday but HHI team plans to continue attempting dialog with the union.

The merger plan faces a tough road ahead as union members of the two shipbuilders had decided to go on strike to oppose the plan. Geoje Mayor Byun Kwang-Yong also takes side with the union, arguing that KDB’s unilateral development and sale procedure elevates unrest in the local community and employment.

By Choi Seung-gyun and Minu Kim