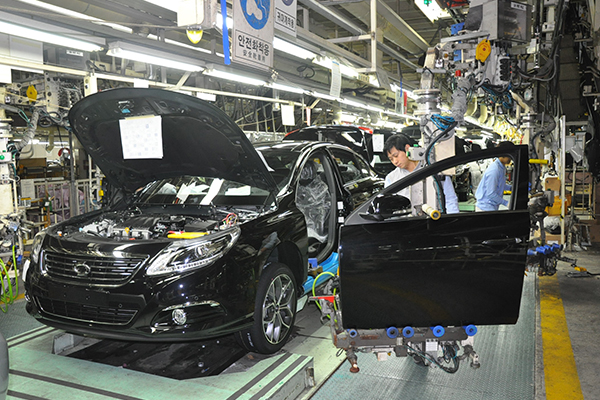 이미지 확대
Renault Samsung Motors Corp. has finalized wage terms for 2018 that had caused labor disputes and production disruptions for the past year, with the management and union agreeing to avoid a lockout and full strike.

The union on Wednesday called off its indefinite strike launched last week, taken aback by the management’s hardline action and lackluster worker support. The company responded by scrapping its plans to impose a partial lockout at its main plant in Busan. The two promptly entered into negotiations and came to a final resolution on wages and work terms to replace the tentative agreement that had been voted down by the union late last month.

The revised agreement, similar to the previous version, agreed to hold the base pay steady while increasing meal allowances and bonuses. One notable inclusion was a joint declaration on “management and labor coexistence,” which called for a “truce period” to maintain stable operations in consideration of the company’s outsize economic contribution to the city of Busan and its vast network of auto part suppliers in the region.

The resolution is expected to be passed when it is put to a union vote on Friday, given the workers’ fatigue from the nearly year-long dispute, according to market insiders. Nearly 60 percent of the workers refused to take part in the latest walkout amid fears that continued disruptions would affect future orders.

Renault S.A., the French parent of the Korean unit, has already slashed orders for Nissan Rogue, a mainstay of the Busan plant, to 60,000 units from last year’s 100,000. It has also decided not to extend its contract for the vehicle when it expires in September, a move that would deliver a major blow to the company as the model accounts for nearly half of its annual output.

By Park Dong-min and Kim Hyo-jin