Shares of Hyundai Rotem Co., the locomotive and rolling stock unit of South Korea’s Hyundai Motor Group, rallied on Wednesday after news that it won a 335.8 billion won ($284 million) deal to supply trams in Poland.

Shares of Hyundai Rotem rose 5.68 percent, or 1,150 won, to finish at 21,400 won on main Korea Composite Stock Price Index (Kospi) on Wednesday, after hitting 22,650 won during intraday trading. Its stocks gained more than 15 percent in just one month after it hit a 52-week low at 18,500 won on May 14. A total 3.2 million shares were traded on Wednesday, significantly higher than previous daily trading volume that has remained as low as 200,000 shares and as high as 600,000 shares.

Shares rallied after Hyundai Rotem announced it won a 335.8 billion won order from Tramwaje Warszawskie (TW), a municipal operator of tramway system in Warsaw, Poland, to supply 123 trams in the eastern European country. The electric wire-linked trams will be operated on major routes in Warsaw.

Hyundai Rotem will manufacture all of the TW trams in Korea before delivering them to Poland starting in the second half of 2021. In general, a single tram is composed of three or five units, which are also called modules. Hyundai Rotem will supply total 123 five-module and three-module trams. 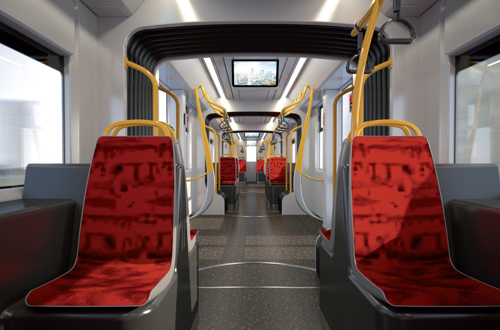 The Korean company said that the deal also comes with an option of building 90 additional trams in the future. Including the option deal, the total order value would reach 540 billion won.

Hyundai Rotem hopes its stellar performance in overseas markets can help it win tram orders in Korea. Six local governments including Seoul, Busan, Incheon, Daejeon, and Daegu, are considering introducing 18 tram routes as part of their urban regeneration projects to combat record levels of fine dust in the country.