It is notable that Burger King and Lotteria have joined the country’s top five most popular food delivery app list even though they are just fast food franchise brands that offer their customers delivery services. Such brand apps can generate more stable revenue than do pure food delivery app peers thanks to steady traffic growth, market analysts said.

Lotteria, a home-grown fast food brand, showed the highest growth in traffic in the past year, with the number of people visiting the brand’s app surging 168 percent in April from a year ago. Burger King also saw a 49.5 percent increase in its app and web traffic during the same period, higher than Baedal Minjok with 35.3 percent. 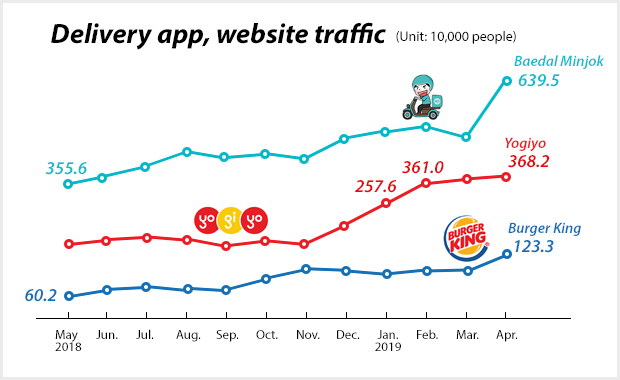 To meet the growing demand for delivery food, these fast food companies are actively expanding their delivery services.

Burger King has expanded its 24-hour delivery service to other parts of Seoul, which previously was restricted to Gangnam in southern Seoul. The move is in contrary to the general trend in the country’s franchise business sector in which many restaurant chains have been forced to close down their 24-hour services due to rising cost burden including minimum wage hikes.

Encouraged by the success of Burger King and Lotteria, Mom’s Touch, a local chicken burger chain, has been aggressively seeking to expand delivery service. The brand said that 40 percent of Mom’s Touch franchise stores offered delivery service through food delivery apps in the second half of last year, but the figure touched 70 percent this year.

Competition in the already crowded Korea’s food delivery market – worth 20 trillion won – is expected to further heat up as the country’s e-commerce leader Coupang and portal giant Naver have recently decided to join the race.

By Oh Dae-seok and Lee Eun-joo