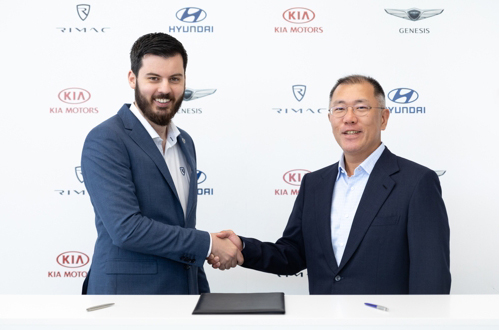 Hyundai Motor and Kia Motors will invest 64 million euros and 16 million euros, respectively, as they enter into a strategic partnership with Rimac for the joint development of high-performance fuel-cell EVs, the companies announced Tuesday. The agreement was sealed in Croatia on Monday (local time).

“Rimac is an innovative company with outstanding capabilities in high-performance electric vehicles,” Chung Euisun, executive vice chairman of Hyundai Motor Group, was quoted in the Korean auto conglomerate’s press release. “Its startup roots and abundant experience collaborating with automakers combined with technological prowess makes Rimac the ideal partner for us. We look forward to collaborating with Rimac on our road to Clean Mobility.”

The Korean auto giant plans to introduce 44 eco-friendly models by 2025 through the partnership, according to the press release.

Rimac was founded in Croatia in 2009 by Mate Rimac, who was at that time 21 years old. The company is a leader in developing electric race cars and produces drivetrains and battery systems for electric hypercars. It came into the spotlight after its first electric race car, the C_One, developed in 2016, won a 400-meter drag race. C_Two, which was unveiled in Geneva Auto Show last year, also instantly grabbed the world’s attention by achieving an acceleration time from 0 to 100 kilometers (62 miles) per hour in 1.8 seconds.

By Lee Jae-cheol and Cho Jeehyun