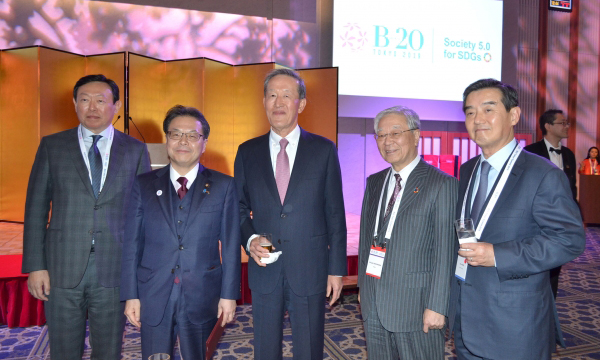 Business leaders of South Korea used the B20 Summit Tokyo momentum this week to gather support from their Japanese counterparts against any extreme economic measures from Tokyo over multiple rows with Seoul over past issues.

Representatives of Korean businesses including the Federation of Korean Industries (FKI) Chairman Huh Chang-soo, Lotte Group Chairman Shin Dong-bin, and Samyang Holdings Chairman Kim Yoon met with Japan’s private sector leaders to discuss ways to improve business ties between the two countries at the B20 Summit held in Tokyo on Mar. 14-15, according to FKI, the interest group for Korea’s large enterprises.

The B20 summit, an annual forum of the private sector leaders of the G20 countries to discuss global issues, served as an important momentum for Korean businesses as the annual conference of businessmen from the two countries planned for May to mark the 50th year was put off to the fourth quarter in the backdrop of worsening sentiment in Tokyo.

The Korean business representatives met with Hiroaki Nakanishi, chairman of Japan Business Federation (Keidanren), during the official welcome reception where they called for enhancing their business ties. The two sides agreed to hold the Korea-Japan business conference in Tokyo on Nov. 14-15 this year.

Prior to attending the B20 Summit, the Korean business leaders met with Toshihiro Nikai, secretary-general of Japan’s Liberal Democratic Party. Huh, FKI chair, stressed on the importance of private sector’s role in warming up the relations between Korea and Japan that recently have chilled due to disputes over their wartime history. The Japanese political heavyweight had visited Korea in July last year and met with Korea’s business and political leaders to improve ties.

Japanese finance minister Taro Aso on Tuesday said tariffs were among several measures Tokyo may take in retaliatory action should Korean plaintiffs proceed with legal actions for seizure of assets of Mitsubishi Heavy Industries in Europe after the Japanese companies refused to comply with Korean court orders to make compensations for unpaid and underpaid wages for forced labor during wartime and colonization period from 1910 to 1945.

The Korean business delegates also requested Japan to play more aggressive role at the G20 Summit, due to be held in Osaka in June this year, in combating international economic challenges such as U.S-China trade dispute, China’s economic slowdown, and spread of trade protectionism.