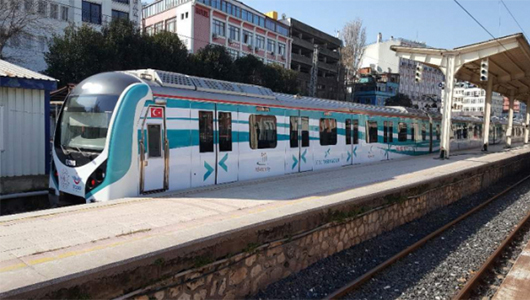 Electric trains made by Korea’s Hyundai Rotem Co. commenced operation on the Marmaray suburban rail corridor that runs below the Bosphorus Strait to connect the Asian and European sides of Istanbul.

Marmaray is a commuter rail line in Istanbul that includes rail tunnel under the Bosphorus Strait, which divides Europe and Asia. Erdoğan at the ceremony said the suburban train services were expected to carry up to 75,000 passengers per hour or 1.7 million passengers a day.

Hyundai Rotem in 2008 won a 670 billion won ($591 million) order to supply 440 Marmaray EMUs. It has supplied 335 EMUs so far and the rest will be shipped by the end of this year, according to the company.

The company obtained its first train order in Turkey in 1996 and continued to win new orders including electric locomotive for Turkish railroad authority and trams in Izmir. Its total train orders in Turkey reach 1,900 units so far.