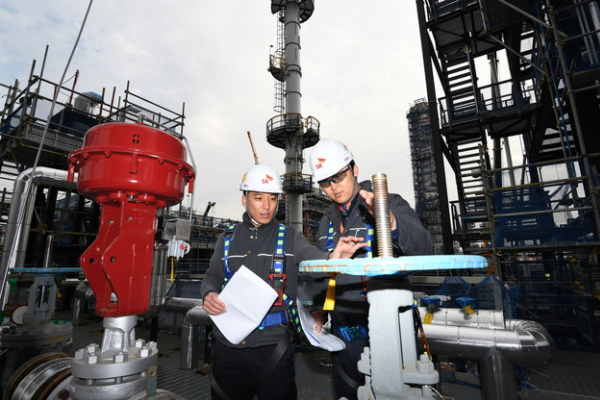 “Construction has almost been completed and the facility is now under pre-startup safety review. Production will begin in March after the two-month test operation from January,” a company official told reporters at a press briefing on Nov. 27 at the construction site in Ulsan.

SK Energy has spent 1 trillion won since November 2017 to build the VRDS facility at its Ulsan Complex in Ulsan for readiness against the International Maritime Organization (IMO)’s new regulation that requires marine fuels to contain less than 0.5 percent sulfur by weight, down from the current 3 percent.

The new facility will be capable of producing 40,000 barrels of low sulfur fuels per day, which will reduce the sulfur content by 86 percent to 3.5 kilograms per ton from the current 24.5 kilograms.

“The latest investment was made as part of preemptive measures to stricter environmental regulations and efforts to create social value with the production of eco-friendly products,” said an official at SK Energy. “The production of expensive low sulfur fuels will also help the company improve the profitability as a new growth engine.”

For the VRDS facility, SK Energy has made the second largest investment since it poured 2 trillion won to upgrade its fluidized catalytic cracking facility in 2008. A total of 30 companies with 880,000 workers have been joining the building since it broke ground in January 2018.