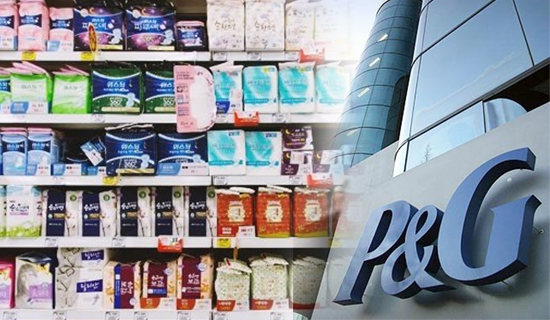 P&G advanced into Korea in 1989 and grew fast with its sanitary napkin brand Whisper that dominated more than half of the Korean market in the 1990s. It came under challenge amid growing preference over local brands of Yuhan-Kimberly Ltd. and LG Unicharm Co.

Yuhan-Kimberly commanded 42.6 percent of the Korean menstrual pad, LG Unicharm 19.7 percent, KleanNara 5.5 percent by KleanNara and P&G 5.1 percent as of the end of March.

The plummeted market share dragged down the ratio of its sanitary product sales to below 5 percent of its total revenue, making the company decide to exit from the market and better focus on more profitable products like detergent and fabric softener.

The scandalous finding of harmful chemicals in almost all sanitary napkins selling in Korea also added to consumer distrust of foreign names.

“The withdrawal is completely irrelevant to the safety of our products. The decision was made after careful study on the Korean market, consumers and the business efficiency. We’ll focus more on other mainstay products to bring better lifestyle for customers,” said an official at P&G Korea.

By Kim Ha-kyung and Lee Ha-yeon