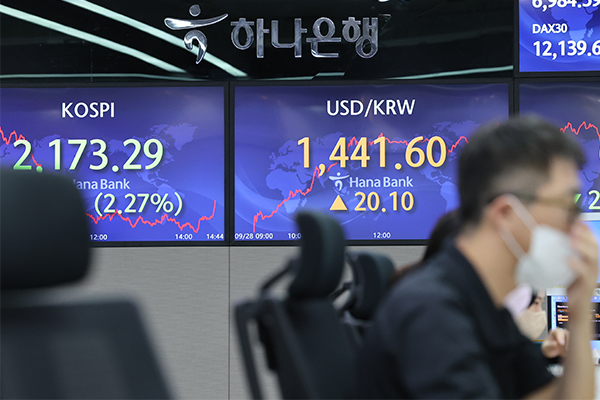 South Korean fiscal and monetary authorities on Wednesday pledged to buy back government bonds worth 5 trillion won ($3.5 billion) over next two days to rein in the bond yields galloping to match the jump in U.S. Treasuries on expectations for faster tightening and hinted of interventionist activity to slow the won’s free fall.

The Bank of Korea on Wednesday posted that it would be buying 3 trillion won worth government bonds in maturities of 10, five and three years Thursday morning. The Ministry of Finance and Economy will return payment on bonds worth 2 trillion won ahead of their maturity in their own buyback move to suck up the supplies and ease the rise in yields on Friday. Details of the buyback would be posted after the bond market closes Wednesday.

The three-year government bond gained 18.4 basis points to 4.488 percent by midday, nearing annual high of 4.548 percent earlier in the week. The three-year government bond visited 4 percent range for the first time since February 2011 last Friday after the U.S. Federal Reserve indicated bigger rises in the interest rates. It hovers above the 10- to 20-year bonds to cause an inversion in the debt curve, a harbinger for a recession.

Since the base rate is at 2.50 percent, the market yield at 4.5 percent could prompt the central bank to fasten with rate increases.

Scare over currency crisis spilled over the stock markets.

Nearly half, or 46.4 percent, of Kospi members tumbled to their 52-week lows including all the bellwether stocks Samsung Electronics, SK hynix, Naver, and Kakao. On the Kosdaq, 41 percent hit 52-week lows.