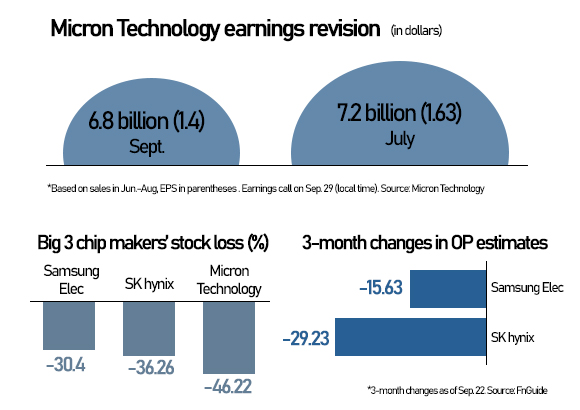 Samsung Electronics shares dropped 8.71 percent so far this month to close at 54,500 won ($38.30) on Friday. They have retreated 30.4 percent since the beginning of the year.

Institutional investors at home and abroad have been offloading the two chip stocks upon grim outlook for memory business. Foreign investors have shed Samsung shares worth 9.94 trillion won so far this year, and domestic institutions 8.50 trillion won worth. Foreigners` ownership fell below 50 percent.

The down spiral could add speed when the market confirms No. 3 memory maker Micron Technology whose shares plummeted 46.22 percent so far this year performing worse than expected when it reports earnings this week. In early August, it had warned that revenue in the quarter could be $7.2 billion, below then-consensus of $9 billion.

Its three-month results ended August would be a harbinger for Samsung Electronics releasing guidance for its third quarter in the second week of October and SK hynix its results for quarter ended September in late October.

Korean brokerage firms have lowered their consensus on Samsung Electronics` operating profit for this year by 15.63 percent from their projections three months ago, and SK hynix’ operating profit down by 29.23 percent, according to market researcher FnGuide.

By Cha Chang-hee and Jenny Lee