BOK may study rate hike in 50bp Oct, to exchange currencies with NPS to ease USD 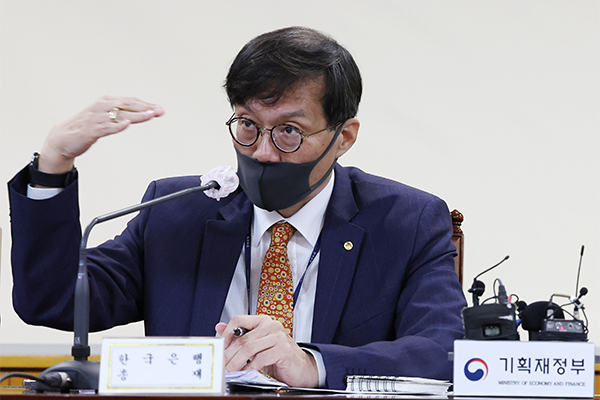 Bank of Korea (BOK) could move faster with rate increases to match the galloping pace of rises in U.S. rates and enable the National Pension Fund to use some of its foreign exchange reserves in desperate measures to rein in the U.S. dollar in the Korean market.

BOK Governor Rhee Chang-yong Thursday indicated the next rate increase could go beyond the usual a quarter of a percentage points as the U.S. Federal Reserve tightening scope exceeds expectations.

“When we gave guidance for rate increases in 25 basis points, we had expected the Fed rates to be at around 4 percent by the year-end. Our expectations have changed,” Rhee told reporters after an emergency meeting with fiscal and financial policymakers Thursday.

The U.S. Fed has indicated it could deliver another hike in three-quarter point in November after delivering the third hike in 75 basis points on Wednesday to place the key rate target at 4.25 percent to 4.5 percent by the year-end, a full percentage point above the 3.25-3.5 percent projected in June.

The Korean base rate is at 2.5 percent, and BOK has two meetings left in the year – in October and November.

The three-year government debt yield has climbed above 4.0 percent for the first time since February 2011 Thursday and hovering above 10- to 20-year, debt on bet on faster rise in the Korean rates.

The Korean won has also dipped below 1,400 versus the U.S. dollar for the first time since May 2009 as the U.S. dollar’s upside strengthened on the indication of bigger rate rises.

The government, central bank, and National Pension Fund (NPS) are discussing an arrangement for the institutional big brother to use the country’s FX reserve instead of directly raising dollars from the market for overseas investment as massive dollar-buying activity by NPS for overseas investment has been blamed for worsening weakening the won.

According to a disclosure by NPS Investment Management, its overseas investments stood at 418.9 trillion won ($297.3 billion) as of the end of April, nearly half of its entire assets worth 919.6 trillion won. Overseas stocks accounted for 26.9 percent of its offshore investments, overseas bonds 7.1 percent, and alternative investments 11.6 percent.

The U.S. Treasury in its latest report stated the NPS’s expansion in overseas investments as one of the reasons for the won’s deep depreciation, noting a steep rise in overseas assets to $330 billion in the end of 2021 from $270 billion earlier in the year.

By Lee Hee-jo and Lee Eun-joo