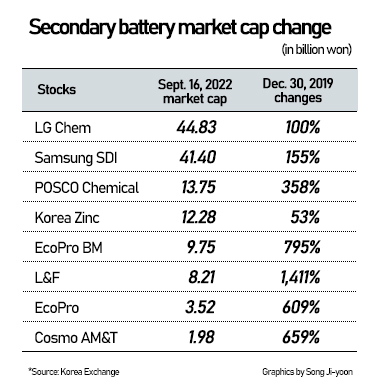 이미지 확대
Secondary battery category has been the primary winner, and cosmetics and retail stocks as losers on the Korean stock market over the last three years under the pandemic influence.

When combined, 765 Kospi and Kosdaq firms, or 38.4 percent out of all 1,993 listed firms, have seen their value shrivel.

Market capitalization is the total value of a publicly traded company`s outstanding common shares owned by stockholders. It is calculated by multiplying the price of a stock by its total number of outstanding shares, which changes by new share issues or capital reduction, such as share cancellations and repurchases.

LG H&H, formerly LG Household & Health Care, saw its market value halved to 10.8 trillion won ($7.7 billion) from 19.7 billion won over the same period, and that of Amorepacific declined nearly 40 percent to 7.3 trillion won. The two Korean cosmetics giants have shifted their focus to the United States and Japan as they lost ground in China.

Game sector has been mixed due to the boom and bust cycle during the Covid pandemic, as well as the wireless sector.

The market cap of PearlAbyss expanded 44 percent to over 3 trillion won, propelled by the success of its new game title.

In the telecommunication network sector, the market value of LG Uplus tumbled 19 percent while KT grew 33 percent, thanks to its aggressive move to groom new growth engines ranging from data center business to content creation.

The biggest winner in the stock market in terms of market value is the secondary battery sector.

Chip stocks, however, stayed about the same. Samsung Electronics’s market cap increased 1 percent and that of SK hynix fell 3 percent.

By Park Yoon-ye and Cho Jeehyun