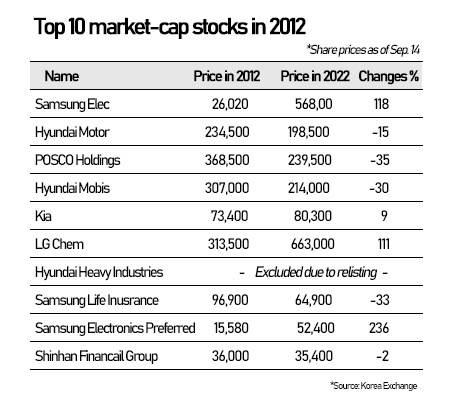 이미지 확대
Four out of ten Kospi stocks value less than 10 years ago, with retreat most heavy in shipbuilding, heavy industries, construction, and insurance.

The sectors of shipbuilding, heavy industries, construction, and insurance suffered the biggest loss mainly because they are sensitive to industrial cycles. They fell behind in the market led by the IT sector.

“Shipbuilding, heavy industries, and construction are closely related to the Chinese economy. The Chinese stock market surged in 2015 after the Shanghai-Hong Kong cross-border trading was allowed. After the bubble was removed in 2010, the Shanghai Index rose only 1.5 times,” said Kim Hak-kyun, senior researcher at Shinyoung Securities.

Five of the top ten firms by market cap ten years ago lost their value. Hyundai Motor was down 15 percent, with POSCO down 35 percent, Hyundai Mobis down 30 percent, Samsung Life down 33 percent, and Shinhan Financial Group down 2 percent.

Of the past top 10 market-cap stocks, Samsung Electronics’ common and preferred shares performed the best, each surging 118 percent and 236 percent, respectively, over the last decade. LG Chem also more than doubled while Kia inched up 9 percent.