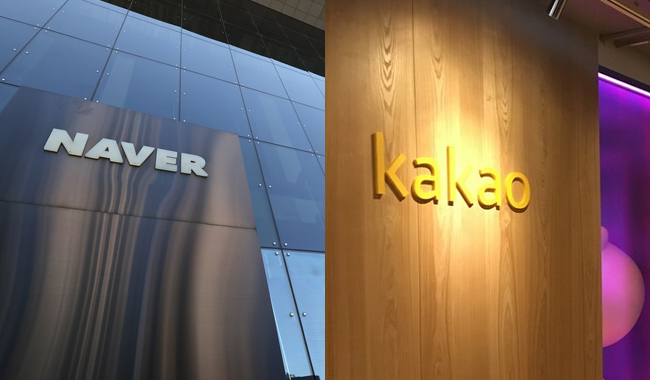 Korean platform behemoths Naver and Kakao fiercely vying over web fiction at home and abroad have upped defense against piracy and illegal distribution for the fight for sustainability in their content foray.

In a rare move, Naver detailed its performance in the digital contents business following the earnings release on Friday that included monthly user count per region and average purchase per user.

The company generated 18.3 billion won ($14 million) in operating income over 91.9 billion won in revenue from its web cartoon and novel business in Korea after the share of paid users jumped to 26 percent upon acquiring the country’s largest web novel platform Munpia in March.

Naver still loses money in e-comics operations in Japan, the world’s largest comics market. However, the company was able to push up its monthly user count from several million to 21.2 million, driven largely by its addition of eBook Initiative Japan, the largest e-book platform in the country, in April.

Naver has set its target to steal the No.1 e-comics app spot in Japan from Kakao Piccoma, the web cartoon and novel business unit of Kakao that has kept to the top place since July 2020.

Naver also is seeking to expand its e-comics service in hands with its Japanese partner and the country’s largest web portal Yahoo! Japan.

The company has been making strides in North America as well. Its contents business in the U.S. incurred a loss of 21.8 billion won. But its earnings are expected to improve sharply once Naver counts in income from its newly acquired Canadian web fiction platform Wattpad.

Naver was able to edge out Kakao in the contents business revenue in the second quarter by recording 300.2 billion won. Kakao registered 227.6 billion won in its content revenue. 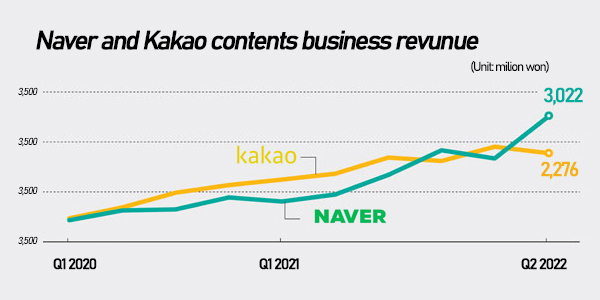 이미지 확대
Kakao has also been going all out to strengthen its digital content power in the global market. The company upon announcing its second-quarter earnings result said it generated 80 percent of digital content transactions from overseas, and Tapas, its e-comics platform operating in North America earned more than 75 percent of its revenue through intellectual properties of Kakao Entertainment. The company has set a goal of achieving 500 billion won or more in transaction value from its digital content platform in North America by 2040.

In Japan, Kakao Piccoma achieved a monthly user count of 9.5 million and a monthly transaction amount of an all-time high of 8 billion yen ($59 million).

In Europe, Kakao kicked off e-comics service in France in March to push out Naver Webtoon from the No. 1 spot in Google Play Store’s cartoon app segment in France in late June.

Both Naver and Kakao have increased their fight against illegal content reproducers and distributors as the two Korean firms have become prey to predators in line with their growth.

Naver has developed ToonRadar to identify and block illegal distributors. The company said copyrighted contents become illegally circulated now over the period of three to four weeks on average. Before ToonRadar was adopted, illegal distribution took less than a day.

Kakao has set a task force for counteracting the illegal distribution of its copyrighted contents. The task force has worked with local police and other authorities and found a group of illegal reproducers and distributors. The company said an estimated 264.6 billion won worth of copyrighted contents were able to avoid illegal distribution over its monitoring period of just 5 months.

According to the Korea Creative Content Agency, the traffic at illegal e-comics platforms has more than tripled to 36.7 billion views in 2020 from 10.6 billion views in 2017. The damage from the illegal distribution of web cartoons amounted to 1.05 trillion won in 2020, doubled from 548.8 billion won in 2019. Detecting such illegal distributors is very challenging as most of such websites have data servers located overseas. The top 10 percent of copycat websites are said to be responsible for more than 90 percent of the entire illegal e-comics traffic.