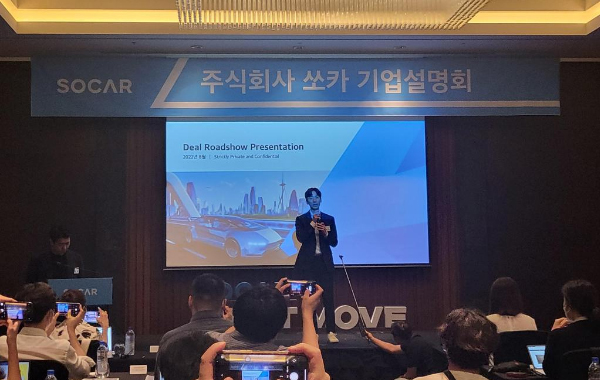 South Korea’s app-based car-sharing pioneer SoCar is pushing ahead with this week’s book-building for initial shares bound for Kospi, even as another anticipated candidate CJ Olive Young withdrew from the IPO pipeline.

“We will raise our capacity as a super app after IPO through M&As in mobility value chain and addition of micro mobility (e-bike) and self-driving shuttle operations to our business portfolio,” said SoCar CEO Park Jae-wook in a press briefing Wednesday.

The platform will be introducing renewed app with sharing options expanded from cars to e-bikes and parking as well as room and transportation booking service within the year.

The pioneer in car-sharing from 2011 rollout commanding 79 percent of the market in Korea prices 4.55 million initial shares in the guidance of 34,000-45,000 won ($35.07) after two-day bookbuilding from Thursday. It can earn 204.8 billion won from the IPO at the top end. Public subscription is set on Aug 10-11, with Mirae Asset Securities as the leading underwriter.

It managed to eke out its first profit of 1.4 billion won in the second quarter on revenue of 91.1 billion won, persuading the company to stay on course despite another pullout by an anticipated IPO contestant.

CJ Olive Young, top beauty and drug store chain under CJ Group, opted not to file for IPO review this month, cancelling its plan to go public in the second half.

“Our shareholders came to agreement that it would be hard to expect a proper corporate value under the current market conditions,” said a company official.

CJ Olive Young’s valuation was previously estimated at about 5 trillion won ($3.8 billion) based on its growth potential and earnings performance. It delivered a consolidated operating profit of 137.8 billion won, gaining 37 percent on year in 2021, with sales up 13 percent to 2.12 trillion won.

“CJ Olive Young has robust offline business, and its move to expand online channels has gained traction, raising expectations for its IPO,” said an unnamed institutional investor. “With its withdrawal, there is no big name left on the IPO pipeline until the end of the year.”

CJ Olive Young has not decided when its IPO process would resume, joining another highly anticipated IPO Hyundai Oilbank that did not set a new date after shelving its IPO scheme last month.

“Sour investment sentiment amid higher inflation and interest rates splashed cold water on IPO plans of big corporate names. The dried-up pipeline will inevitably continue for a while,” said an official from a securities firm.

By Kang Woo-seok and Lee Ha-yeon