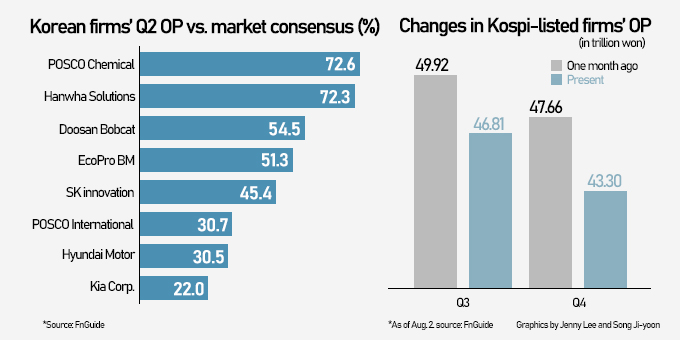 이미지 확대
Korea Inc. generally fared better than expected in the second quarter thanks to a weaker Korean currency against the U.S. dollar that aided exporters and stronger selling prices to cover higher raw materials costs, but their outlook in the latter half is not so assuring in the face of softening global economy.

According to Maeil Business Newspaper’s analysis of 126 firms that had reported second-quarter earnings as of Monday, 68 firms or 54 percent beat expectations for the quarter ended June.

Companies that exceeded market estimates by 10 percent or higher tallied at 44, of which 28 were blue-chip members on the Kospi 200 index. Export-oriented large-cap companies benefited from the weakening in the exchange rate with the U.S. dollar averaging at 1,260 won in the second quarter.

Korean exporters may not be so lucky in the second half of this year as external demand has been weakening from strong inflation and higher interest rates.

Reflecting such concerns, local brokerages have lowered their earnings expectations for Korea Inc. for the latter half.

“The chip sector leads the market corrections, with its consensus down 11.3 percent in a month,” said Hwang Ji-woo, a researcher at IBK Securities.

By Kang Min-woo and Jenny Lee