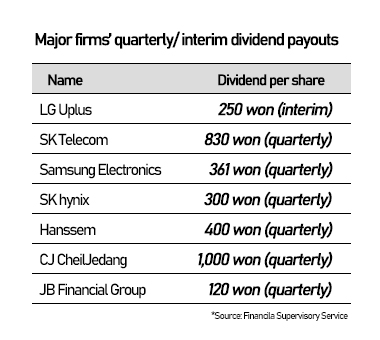 According to Korea Securities Depository (KSD), on Sunday, among Kospi members, 113 have pledged interim dividends in quarterly or half-year basis, up from 85 count in 2021 and 69 in 2020.

This year’s interim payout after second-quarter performance will likely be fresh high after exceeding 4 trillion won ($3.06 billion) for the first time last year.

“Interim dividends from Kospi 200 stocks could amount to 3.3 trillion won based on the outstanding shares, up slightly from 3.2 trillion won a year ago,” said Jeon Kyun, a researcher at Samsung Securities.

In Korea, an interim dividend is paid in July or August after June 30 settlement before the final-year settlement at the end of the year.

LG Uplus recently pledged an interim dividend of 250 won per share, up 25 percent from a year ago. “We will keep up efforts to overachieve in financial performance to increase dividend rewards to our shareholders,” the company said.

POSCO Holdings who paid 4,000 won per share in the first quarter and will soon decide on the payout for the second quarter.

CJ CheilJedang has offered to pay quarterly dividend of 1,000 won. JB Financial Group is offering its first interim dividend of 120 won per share to celebrate its record interest income in the first half.

Interim dividend could pose as a relief to investors amid rising interest-rate and uncertain investment environment.

By Kim Geum-yi and Jenny Lee