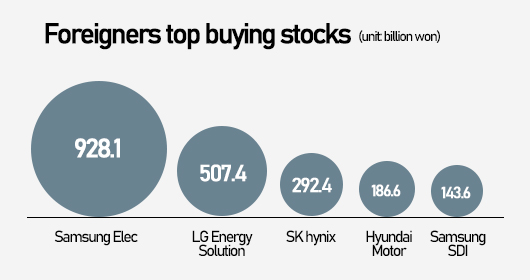 이미지 확대
Large-cap Korean stocks have finally been lifted on the return of foreign capital.

According to the Korea Exchange on Sunday, the index of large-cap stocks on the Kospi gained 7.22 percent last Friday from July 6 when the Kospi touched this year’s lowest of 2,292.01, outperforming the monthly rises of 5.41 percent in the index of mid-cap stock and 6.8 percent of smaller stocks.

Throughout the first half, large-cap stocks plunged 21.17 percent, greater than the losses of 16.61 percent in mid-caps and 14.08 percent in small caps.

The rebound owed to the return of foreign capital that had kept up selling spree most of the first half.

“Foreign capital has turned to bargain-hunting after the U.S. dollar hit 1,320 won and the Kospi fell to near 2,300,” said Jung Yong-taek, a senior analyst at IBK Securities. “Large-cap stocks benefited as the late investment was led by passive funds,” he added.

Stocks with upbeat second-quarter earnings rode on the investment wave in June.

Hanwha Solutions saw the largest 33.13 percent increase in its stock price after delivering an operating profit of 277.7 billion won in the April-June period, higher than market consensus of 161.1 billion won.

POSCO Chemical gained 24.06 percent after reporting an operating profit of 55.2 billion won, sharply above the market consensus of 32 billion won.

By Kang Min-woo and Lee Ha-yeon