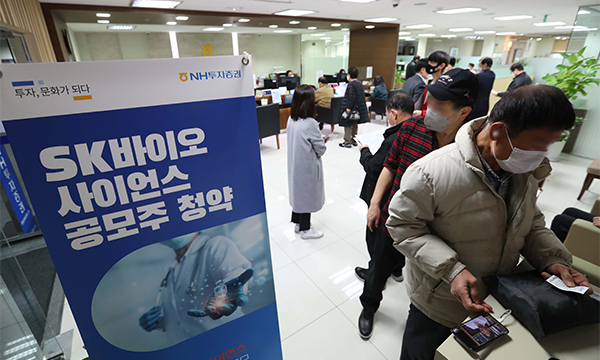 Employees of SK Bioscience Co. and SK IE Technology Co. that invested in equity offerings last year under employee stock ownership plan (ESOP) have reaped significant gains with the stellar stock performance, but those of Krafton Inc. have been suffering massive losses since the initial public offering.

According to an analysis conducted by Maeil Business Newspaper Thursday on employee stock ownership subscriptions of IPO stocks of over 5 trillion won ($4.2 billion) in market capitalization listed last year on the Kospi and Kosdaq markets, most of the employees that participated in the scheme are expected to gain big profit.

SK Bioscience allocated 4,490,400 shares for ESOP last year. Each employee is estimated to have received 7,598 shares, given total employees were 591 at the time. The company’s stock price currently hovers around 190,000 won, sharply up from the debut prices of 65,000 won, allowing each employee to benefit a gain of 949.74 million won in valuation. 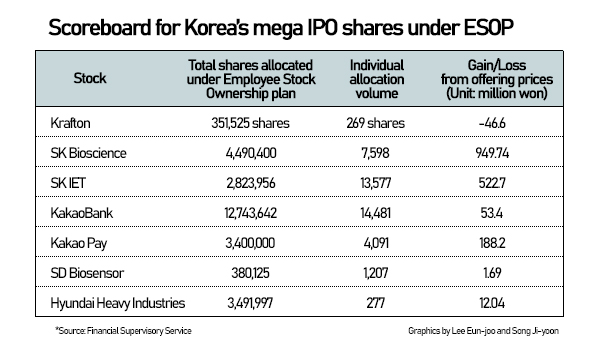 이미지 확대
Kakao Pay Corp. and KakaoBank Corp. stocks whose prices have plunged recently due to massive selloffs by executives are still trading higher than their market debut prices. But the employees could have gained more if there had not been any moral hazard issue or regulation issue in the companies that have dragged down the stock prices. KakaoBank and Kakao Pay stock prices went up to as high as 94,400 won and 248,500 won, respectively, since their IPOs but KakaoBank and Kakao Pay on Friday were traded at the prices more than halved from the peaks.

The value of Krafton shares owned by its employees, meanwhile, plunged since its IPO with its stock price tumbling 34 percent from the offering price. Each employee that received 269 shares are expected to log 46.6 million won loss.

Under ESOP, employees are not allowed to sell shares for one year.