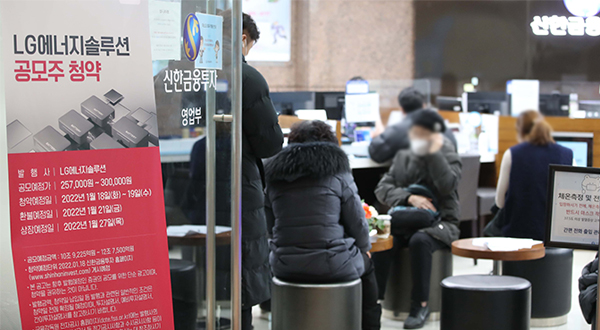 The explosive turn to quick individual borrowings was triggered by the astronomical $13 trillion institutional bids for the initial shares in the world’s No. 2 EV battery maker.

Retail subscription that closed on Wednesday also raised the bar high for a Korean IPO, drawing deposits worth 114.1 trillion won.

Banks’ credit loans were stable this year as the financial authority called on local lenders to keep on-year growth of household debt in the 4 percent range, tighter than last year’s 5 percent.

But the cap tipped over from a flood of demand, mostly through overdraft accounts that could be pulled out immediately.

A minimum 1.5 million won is required to subscribe for 10 LG Energy Solution shares and individuals would have rushed to pull out from overdraft accounts to make the bids, said an unnamed official from a commercial lender.

By Moon Il-ho and Lee Eun-joo