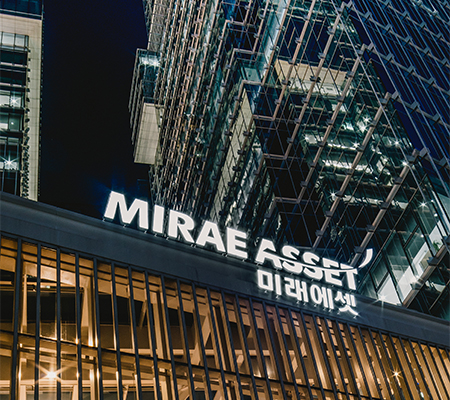 Mirae Asset announced Wednesday that it has come to own ETF Securities in Australia after Mirae Asset ETF Holdings under Mirae Asset purchased 55 percent and Global X, a subsidiary of Mirae Asset based in New York, 45 percent, for 120 billion won ($93.9 million).

ETF Securities, which will join Mirae Asset as a subsidiary, has 21 ETFs listed on Australia Stock Exchange. It is the seventh-largest ETF provider in Australia with 4 percent market share and 4.24 trillion won asset under management.

“We are incredibly excited to enter the Australian market and to meaningfully expand our global ETF footprint through the acquisition of ETF Securities’ inventive business,” said Lee Byung-sung, chief executive of Mirae Asset. “This acquisition underscores Mirae Asset’s continued commitment to maintaining industry-leading ETF businesses in key markets around the world and brings immediate scale to our operations in Australia.”

ETF Securities focuses on themed ETFs and diverse raw materials. Analysts noted that the company has found new investment opportunities in raw materials and agriculture that have received spotlight amid global supply shortage and price surge.

ETF Securities – founded in 2002 – has differentiated itself by introducing ETFs with spot raw materials like gold, silver, and palladium. ETFS Physical Gold, which was listed on ASX in March 2003 is considered world’s first spot gold-oriented ETF. It has also listed other spot related ETFs of platinum, silver, and palladium. 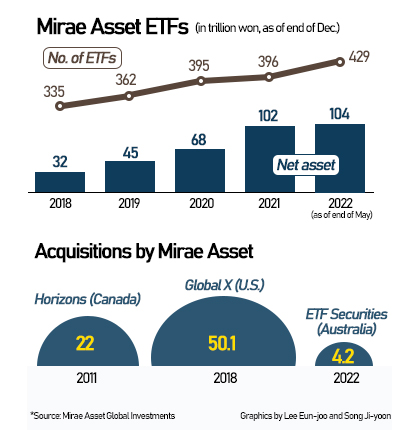 이미지 확대
The ETF has also recently stretched focus to ETFs with automation and artificial intelligence (AI)-related businesses (ROBO) and those that invest in metal mining companies (ACDC). The net asset of each of the ETFs reaches over 200 billion won and 450 billion won.

“We sold BetaShares we bought as a package when acquiring Canadian ETF provider Horizons ETF in 2011 last year,” said an unnamed official from Mirae Asset. “The Australian pension and ETF markets are expanding and Mirae Asset was able to re-enter the Australian market through the latest acquisition.”

Mirae Asset has been aggressive in expanding footprint in global ETF market. As of end of May, Mirae Asset managed 429 ETFs worth 104 trillion won in 10 countries including Korea, U.S., Canada, Hong Kong, and Japan.

It made its first inroads into overseas markets in 2003 by setting up an offshore management corporation in Hong Kong. It also established local entities in India in 2006, the United Kingdom in 2007, and the U.S., China, and Brazil in 2008.

By Kim Jung-beom, and Lee Eun-joo