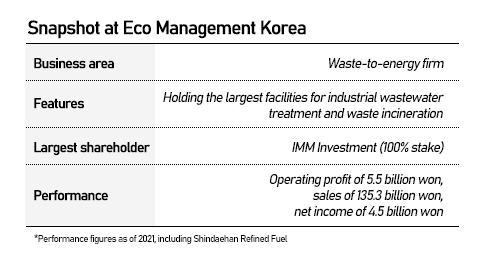 According to the investment banking industry on Thursday, Stonepeak Infrastructure Partners of U.S., Singapore’s Keppel Infrastructure Trust, and Korea’s Ecobit. EMK’s current owner IMM Investment have been shortlisted out of ten preliminary bidders.

What is offered is EMK’s controlling stake held by IMM Investment and Korea Development Bank (KDB). EMK’s affiliate Shindaehan Refined Fuel is excluded from the deal as tangible results are expected from facility investment.

EMK, established in 2010, holds the largest industrial incineration capacity in Korea. It converts waste heat generated from incineration into renewable energy. JP Morgan Asset Management held the company and sold it to IMM in 2017.

Stonepeak Infrastructure Partners, headquartered in New York in the U.S., is an international alternative investment firm, specializing in infrastructure and real assets. It has shown interest in the Korean market. Before the EMK deal, it participated in the bidding for Koentec, an industrial waste disposal service provider, in 2020.

EMK’s price is estimated at 600~700 billion won when Shindaehan Refined Fuel is excluded from the deal. “Hopeful buyers are interested in the landfill site in Gyeongju with a 10-year landfill capacity,” said a source familiar with the deal.