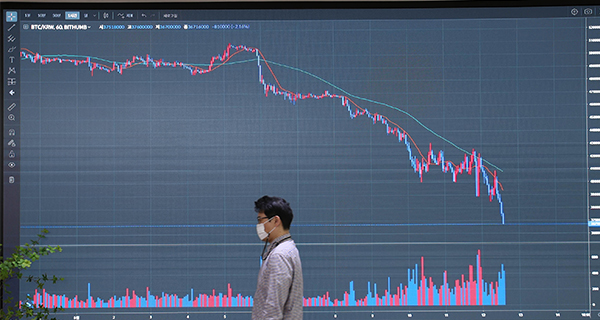 Over 500,000 Korean investors are screaming with panic amid brewing speculation about major scheme by the Korean founders of the digital tokens that have caused a downward spiral in the global digital as well as mainstream capital markets after withdrawals of Terra (Luna) and TerraUSD (UST) were temporarily suspended for so-called network troubles.

Terra validators tweeted late Thursday they were plugging out their network “to come up with a plan to reconstitute it.”

Luna was priced at around $0.008 at the time of network halt, and UST at $0.19. Block resumed production Friday.

The so-called algorithmic stablecoin TerraUSD, supposed to be pegged one-to-one with the U.S. dollar, tumbled to as low as $0.26 on Thursday, losing half of its value in just a week. Before its crash, it was the world’s third largest stablecoin with a market cap of $18 billion up until last week.

Its associated token Luna’s value plunged 99 percent to 5 cents over the same period with its market cap nosediving to 678.6 billion won ($527 million) on Thursday from 50 trillion won a week earlier. The digital token had traded at $119 last month and ranked No. 10 in the world by market cap.

Luna is TerraUSD’s partner cryptocurrency developed to keep balance in value. The two runs on a contract-based algorithm system that keeps the price of TerraUSD anchored to $1 by destroying Luna tokens to create new TerraUSD tokens.

They are designed to maintain stability in highly volatile cryptocurrency market. But in reality, after TerraUSD lost to below $1, the vicious cycle began with the stablecoin’s fall leading Luna to plunge and to hit back TerraUSD.

“It is a sad ending to this innovative algorithmic stablecoin experiment,” according to Adil Abdulali, head of portfolio management at Securitize, cited by crypto media Blockworks. 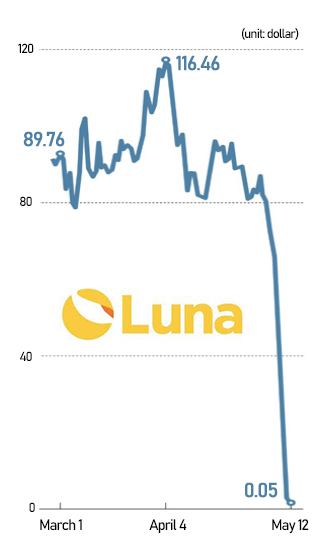 이미지 확대
Downfall of TerraUSD and Luna led the crypto bellwether bitcoin to drop below $2,600 on Thursday, as worries grew that Terraform Labs, the company behind the two stablecoins, may offload part of or even entire $3.5 billion worth of bitcoins that it has amassed for support.

Analysts are fearing bank runs of crypto investors spooked by the latest crypto market crash. Some are even comparing TerraUSD’s collapse to Lehman Brothers’ downfall that triggered the 2008 global financial crisis.

Major crypto exchanges in Korea put TerraUSD and Luna on the list needed for investment discretion, which allows investors to sell existing tokens but not to make additional purchases.

TerraUSD and Luna are developed by Do Kwon, founder and CEO of Terraform Labs. The company is headquartered in Singapore but is considered as Korean cryptos for being headed by Korean national. Kwon reportedly has moved to raise $1.5 billion to resolve the crisis with TerraUSD as collateral. However, rumors are spreading that Kwon has gone into hiding after Terraform Labs office in Korea was found to have closed down on April 30.