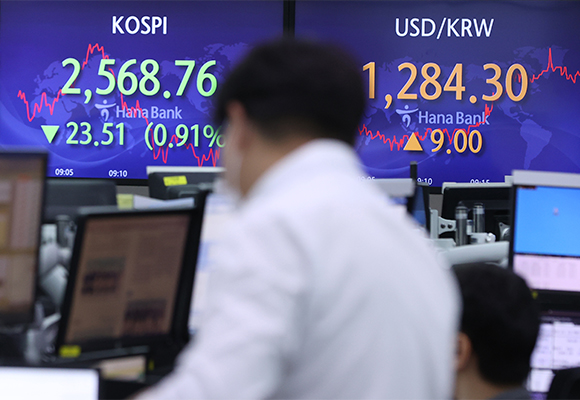 South Korean mom-and-pop investors are in panicky mood from stock market crashes in the U.S. and at home after having put more than 220 trillion won ($171.4 billion) in domestic and offshore – mostly in U.S. - shares over the last two years.

According to data from Korea Exchange and Korea Securities Depository on Thursday, Korean individuals net purchased 226.1 trillion won worth of local and foreign stocks from early 2020 to May 6. They net bought 165.2 trillion won in local stocks including 132.2 trillion won on the main Kospi and 33 trillion won on Kosdaq.

Samsung Electronics Co. was their top pick at home and Tesla overseas.

Ever since the Covid-19 outbreak, retail investors net bought 51.8 trillion won in the bellwether stock. They also purchased 12.5 trillion won worth of Samsung Electronics preferred shares to bring their holding total to 64.2 trillion won, accounting for nearly 40 percent of entire purchase.

The most popular target was Tesla Inc.

But mom-and-pop investors could be burned due to bearishness at home as well as in the U.S. due to faster tightening and stagflation scare.

The benchmark Kospi has lost psychologically-important 2,600 threshold and is off 12 percent the peak of 3,305 last year. It is the first time in 17 months for the Kospi to finish below 2,600.

As of May 8, Tesla shares were down 24.3 percent from the beginning of the year, Apple 13 percent, Nvidia 40 percent, Alphabet 21 percent, and Amazon.com 35 percent.

Yet retailers are yet to stop their stock frenzy.