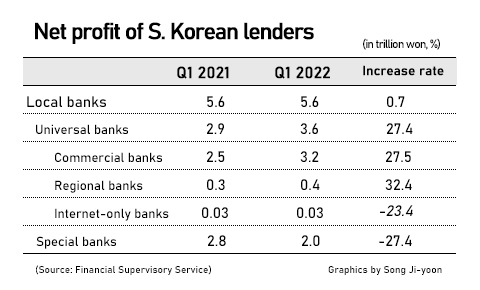 Korean lenders generated 5.6 trillion won ($4.4 billion) in net income from January to March this year, up 0.7 percent from a year ago, according to the Financial Supervisory Service (FSS) on Wednesday.

Their interest income, generated from interest-bearing assets like commercial loans and mortgages, jumped 16.9 percent on year to 12.6 trillion won on rising interest rates. This contributed to net income margin to add 0.09 percentage point versus a year ago. Net income margin is a key profitability measurement of comparing the difference between banks’ interest income and interest paid out to their lenders against the amount of their interest-bearing assets.

The difference between lending and deposit rates came to 1.93 percent in the first quarter, rising 0.15 percentage point from a year ago.

FSS advised stronger monitoring and capital adequacy management in the face of growing uncertainties in the local and global economy.