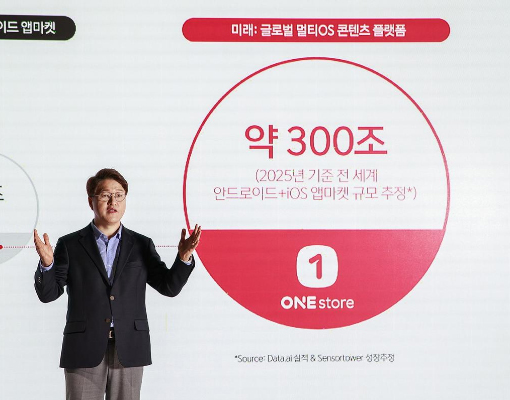 One Store Co., the No. 2 app store in Korea, would see through its IPO after bookbuilding on Tuesday regardless of the pricing results, unlike SK shieldus, another unit under same parent SK square, that called off IPO upon tepid institutional demand.

“Our company is in a different business area and I believe we have great potential to grow,” said One Store CEO Lee Jae-hwan in a press conference on Monday to deny any change to its IPO scheme.

One Store’s affiliate SK shieldus, the No. 2 security company in Korea under the same parent SK square Co., on Friday called off IPO as pricing fell below desired band.

“Excluding the Chinese carriers that cannot access Google Play, One Store ranks first in the third-party app market and there are many business opportunities where we can utilize the funds raised from the IPO,” said Kim Sang-don, the chief financial officer of One store.

One Store, spun off from SK planet in 2016, was jointly created with the country’s three wireless carriers and internet giant Naver Corp.

Results of One Store pricing would be announced after bookbuilding on Tuesday. The desired band has been set between 34,300 won ($26.85) to 41,700 won, 4.3 to 5.2 times higher than the price-to-sales (P/S) ratio, which could capitalize its circulating shares at more than 1 trillion won at the top end.

Earlier the company changed its reference for valuation to Naver, Kakao, and Nexon from Apple and Alphabet, the parent company of Google. One Store also applied a maximum 41.5 percent discount to its valuation.

“Considering the upward growth potential of One Store, we have applied a considerable amount of discount to our valuation and the IPO has also been priced fairly,” said Lee.

According to Kim, the company has set a target to achieve more than 5 billion won in operating profit this year by exceeding the break-even point (BEP).

By Woo Soo-min and Susan Lee