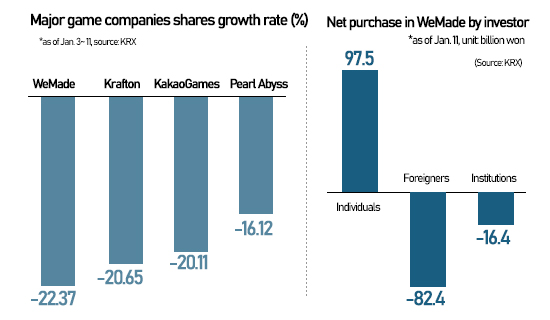 Korean game stocks that flew high last year are crashing in the new year on institutional selling amid risk aversion mood due to signs of faster monetary tightening in the United States and stagnating cryptocurrency demand that becomes the basis for their revenue from play-to-earn model.

Last year’s blockbuster debutant Krafton and largest in the game category in terms of market cap has been the biggest disappointment, losing 21 percent as of Wednesday and off 25 percent from its IPO price of 498,000 won. They closed up 0.68 percent at 367,500 won on Wednesday.

Kosdaq-trading WeMade lost 22.4 percent as of Wednesday as it also suffers from waning hype about metaverse and non-fungible token business.

The game stocks along with IT bellwethers have been mostly battered as top picks for profit-taking by institutions rolling back their stock portfolio ahead of monetary tightening by the U.S. 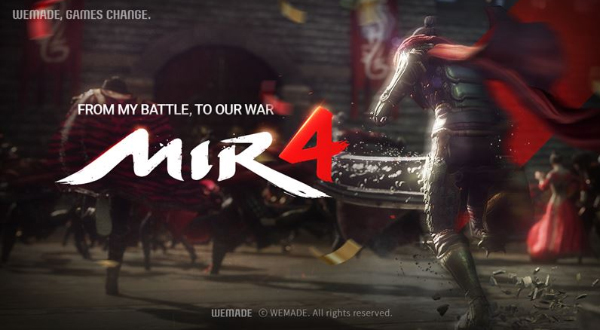 WeMade which was among the first to apply P2E model on global version of Mir 4 gained 814 percent in its stock last year. WeMade Max soared 1,502 percent.

Hyundai Motor Securities predicted that Krafton`s Q4 earnings would be 5 percent below market expectations and lowered its target price by 9 percent to 600,000 won ($504). eBest Investment & Securities estimated that Kakao Games` sales in the fourth quarter of last year would decrease by 58 percent from the previous quarter and lowered its target price from 125,000 won to 110,000 won.

The downward spiral in crypto market that reflects the value of tokens on metaverse or P2E-modeled games also dampened appetite for game stocks.

Bitcoin`s price fell nearly 40 percent from last highs. Wemix, the reward token in Mir 4, has also lost much of its value this year.

By Kim Geum-yi and Jenny Lee